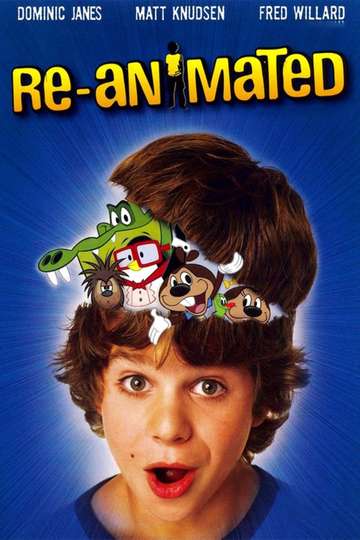 Need to watch 'Re-Animated' on your TV, phone, or tablet? Tracking down a streaming service to buy, rent, download, or view the Bruce Hurwit-directed movie via subscription can be difficult, so we here at Moviefone want to do right by you.

We've listed a number of streaming and cable services - including rental, purchase, and subscription alternatives - along with the availability of 'Re-Animated' on each platform. Now, before we get into the various whats and wheres of how you can watch 'Re-Animated' right now, here are some specifics about the Turner Studios, Cartoon Network Studios, Renegade Animation family flick.

Released December 7th, 2006, 'Re-Animated' stars Rosemary Garris, Dominic Janes, Bil Dwyer, Rachel Quaintance The NR movie has a runtime of about 1 hr 25 min, and received a user score of 51 (out of 100) on TMDb, which collated reviews from 21 respected users.

Curious to know what the movie's about? Here's the plot: "Part live-action, part animated story about a boy who, after an awful amusement park accident, gets a brain transplant, which allows him to see cartoon characters in real life."

'Re-Animated' is currently available to rent, purchase, or stream via subscription on Spectrum On Demand, and DIRECTV .

They're Watching
An American TV crew gets trapped in a centuries-old web of revenge, ho...

Re-Kill
Five years after a zombie outbreak, the men and women of R-Division hu...

The King
Transposing the story of the Passion of Jesus to Sardinia, Su Re draws...

Oedipus Rex
In pre-war Italy, a young couple have a baby boy. The father, however,...

Re-Elected
Siblings Nate and Angela Harmon and their friends must face off agains...

Very Happy Alexander
Alexandre, a young and honest farmer, is oppressed by an authoritarian...

Re-Animator
A dedicated student at a medical college and his girlfriend become inv...