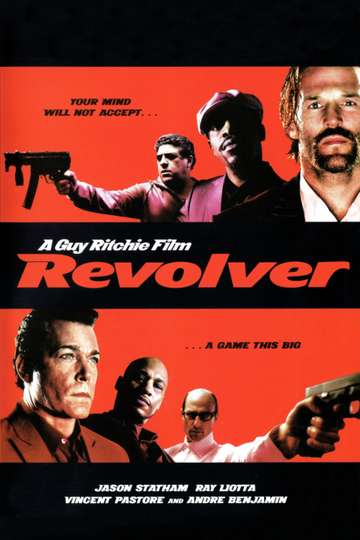 Need to watch 'Revolver' on your TV or mobile device at home? Tracking down a streaming service to buy, rent, download, or view the Guy Ritchie-directed movie via subscription can be a challenge, so we here at Moviefone want to do the work for you.

Read on for a listing of streaming and cable services - including rental, purchase, and subscription choices - along with the availability of 'Revolver' on each platform. Now, before we get into all the details of how you can watch 'Revolver' right now, here are some particulars about the Revolver Pictures Co., Toff Guy Films, EuropaCorp, Isle of Man Film, Destination Films, Canal+ mystery flick.

Released September 22nd, 2005, 'Revolver' stars Jason Statham, Ray Liotta, Vincent Pastore, AndrÃ© Benjamin The R movie has a runtime of about 1 hr 51 min, and received a user score of 64 (out of 100) on TMDb, which assembled reviews from 971 experienced users.

Interested in knowing what the movie's about? Here's the plot: "Hotshot gambler Jake Green (Jason Statham) is long on bravado and seriously short of common sense. Rarely is he allowed in any casino because he's a bona fide winner and, in fact, has taken so much money over the years that he's the sole client of his accountant elder brother, Billy. Invited to a private game, Jake is in fear of losing his life."

Desperado
El Mariachi, a musician, arrives in a Mexican town and is mistaken as...

Lucky Number Slevin
Slevin is mistakenly put in the middle of a personal war between the c...

The Bank Job
Terry is a small-time car dealer trying to leave his shady past behind...