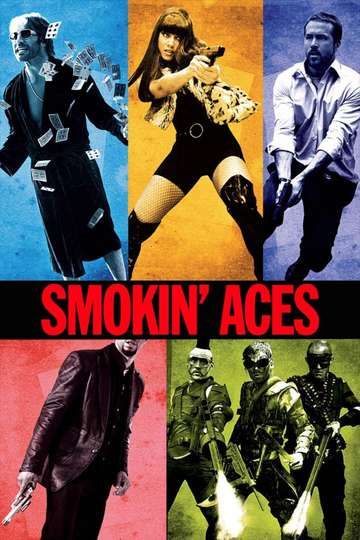 Looking to feast your eyes on 'Smokin' Aces' on your TV, phone, or tablet? Hunting down a streaming service to buy, rent, download, or view the Joe Carnahan-directed movie via subscription can be a challenge, so we here at Moviefone want to do the work for you.

Read on for a listing of streaming and cable services - including rental, purchase, and subscription alternatives - along with the availability of 'Smokin' Aces' on each platform when they are available. Now, before we get into all the details of how you can watch 'Smokin' Aces' right now, here are some finer points about the Universal Pictures, StudioCanal, Relativity Media, Scion Films, Working Title Films thriller flick.

Released January 26th, 2007, 'Smokin' Aces' stars Ryan Reynolds, Jeremy Piven, Ray Liotta, Alicia Keys The R movie has a runtime of about 1 hr 49 min, and received a user score of 65 (out of 100) on TMDb, which put together reviews from 1,386 experienced users.

What, so now you want to know what the movie's about? Here's the plot: "When a Las Vegas performer-turned-snitch named Buddy Israel decides to turn state's evidence and testify against the mob, it seems that a whole lot of people would like to make sure he's no longer breathing."

'Smokin' Aces' is currently available to rent, purchase, or stream via subscription on FILMRISE, .

Payback
"No More Mr. Nice Guy."
Training Day
"The only thing more dangerous than the line being crossed, is the cop who will cross it."

Waiting...
"What happens in the kitchen ends up on the plate."
Smokin' Aces 2: Assassins' Ball
"Prepare for Murder, Mayhem & Madness."

Run, Fatboy, Run
"Love. Commitment. Responsibility. There's nothing he won't run away from."

Tropic Thunder
"Get Some."
Running Scared
"Every bullet leaves a trail."
Stalker
"Who is the hunter?"

Shoot 'Em Up
"Just another family man making a living."

Collateral
"It started like any other night."
Ronin
"Your ally could become your enemy."

Shooter
"Yesterday was about honor. Today is about justice."

The Lookout
"Whoever has the money has the power"

Crank
"There are a thousand ways to raise your adrenaline. Today, Chev Chelios will need every single one."
Swordfish
"Log On. Hack In. Go Anywhere. Get Everything."
The Recruit
"Trust. Betrayal. Deception. In the C.I.A. nothing is what it seems."

Hugh Jackman Talks About His Return as Wolverine