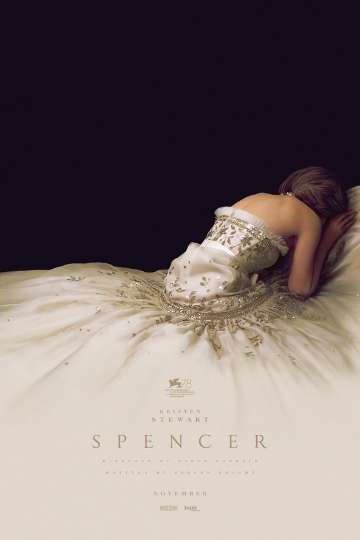 Fancy watching 'Spencer' on your TV, phone, or tablet? Tracking down a streaming service to buy, rent, download, or watch the Pablo Larraín-directed movie via subscription can be a challenge, so we here at Moviefone want to take the pressure off.

Below, you'll find a number of top-tier streaming and cable services - including rental, purchase, and subscription options - along with the availability of 'Spencer' on each platform when they are available. Now, before we get into the various whats and wheres of how you can watch 'Spencer' right now, here are some specifics about the Komplizen Film, FilmNation Entertainment, Fabula, Shoebox Films, Topic Studios drama flick.

Released November 5th, 2021, 'Spencer' stars Kristen Stewart, Jack Farthing, Sally Hawkins, Timothy Spall The R movie has a runtime of about 1 hr 57 min, and received a user score of 69 (out of 100) on TMDb, which assembled reviews from 1,264 knowledgeable users.

Interested in knowing what the movie's about? Here's the plot: "The marriage of Princess Diana and Prince Charles has long since grown cold. Though rumors of affairs and a divorce abound, peace is ordained for the Christmas festivities at the Queen's Sandringham Estate. There's eating and drinking, shooting and hunting. Diana knows the game. But this year, things will be profoundly different. Spencer is an imagining of what might have happened during those few fateful days."

Giorgio Moroder's Metropolis
The Son Of...
Oprah + Viola: A Netflix Special Event
"Pull up a chair."
No One's with the Calves
Poster Boy
"Can he keep his secret?"
Defying Gravity
"Some pledges are for keeps."
Doctor and the Healer
Rocketry: The Nambi Effect
No One Sleeps

The Eyes of Tammy Faye
"Sometimes in life, you have to take your lashes."
Food of Love
The Kardashians - An ABC News Special

The Power of the Dog
TLMEA
"Hell is frozen over"
Corro da te
Le Patient
HADES
"Keep repeating to yourself ... this is just a bad dream"
Oh! Those Most Secret Agents