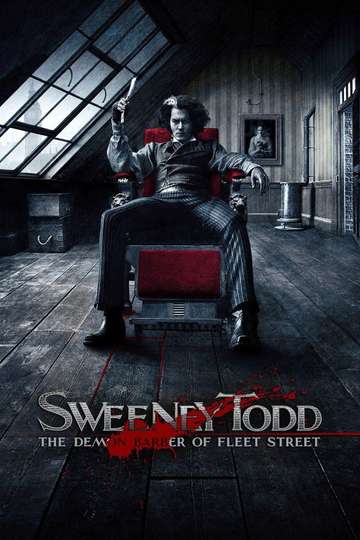 Yearning to watch 'Sweeney Todd: The Demon Barber of Fleet Street' in the comfort of your own home? Discovering a streaming service to buy, rent, download, or watch the Tim Burton-directed movie via subscription can be difficult, so we here at Moviefone want to do the work for you.

Released December 20th, 2007, 'Sweeney Todd: The Demon Barber of Fleet Street' stars Johnny Depp, Helena Bonham Carter, Alan Rickman, Timothy Spall The R movie has a runtime of about 1 hr 56 min, and received a user score of 72 (out of 100) on TMDb, which collated reviews from 5,017 well-known users.

You probably already know what the movie's about, but just in case... Here's the plot: "The infamous story of Benjamin Barker, a.k.a Sweeney Todd, who sets up a barber shop down in London which is the basis for a sinister partnership with his fellow tenant, Mrs. Lovett. Based on the hit Broadway musical."

Movies Like Sweeney Todd: The Demon Barber of Fleet Street

Charlie and the Chocolate Factory
"Prepare for a taste of adventure."
Chocolat
"…and the world is still indulging!"
Mars Attacks!
"Nice planet. We'll take it!"
The Imaginarium of Doctor Parnassus
"The man who tried to cheat the devil."
Edward Scissorhands
"His scars run deep."
The Nightmare Before Christmas
"This is Halloween, everybody make a scene!"

Secret Window
"The most important part of a story is the ending."

Alice in Wonderland
"You're invited to a very important date."
Pirates of the Caribbean: At World's End
"At the end of the world, the adventure begins."
Sleepy Hollow
"Heads will roll."
Beetlejuice
"He's guaranteed to put some life in your afterlife."
From Hell
"Only the legend will survive."

Dark Shadows
"Every Family Has Its Demons"

Big Fish
"An adventure as big as life itself."
Charlie: The Life and Art of Charles Chaplin

Frankenweenie
"The electrifying dog is back from beyond the grave"
Ed Wood
"When it came to making bad movies, Ed Wood was the best."
The Tourist
"It all started when he met a woman."
The Lone Ranger
"Never Take Off the Mask"

Finding Neverland
"Where will your imagination take you?"