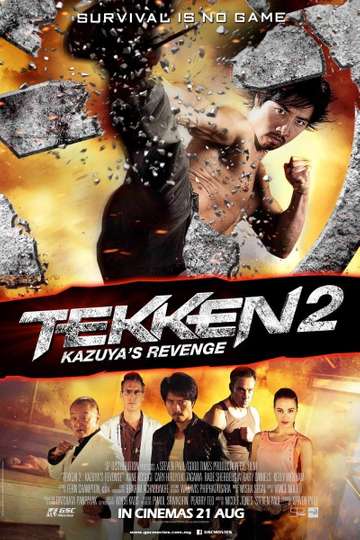 "Survival Is No Game"
TMDb Score
42
PG-13 1 hr 30 minAug 12th, 2014Action
A young man, Kazuya Mishima, wakes up alone in an unfamiliar hotel room without any recollection of who he is or how he got there. He is tormented by flashes of his past and by the face of an ominous stranger. The next thing he knows, Kazuya is ambushed and kidnapped by an underground crime organization and, soon after, turned into a ruthless assassin. During a mission to assassinate a man named Brian Fury, Kazuya finds that his target harbors clues to his true identity. With the help of Fury and a female assassin, Kazuya follows the clues, leading him to the lab of his reoccurring flashbacks. Here, he will finally confront his past and the ominous man of his nightmares - Heihachi Mishima, face the ultimate betrayal, and Ieam the truth about who, and what, he really is. TEKKEN 2: KAZUYA’S REVENGE is non-stop action from the first scene to the last.
Show More
DirectorWych Kaosayananda
StarringKane KosugiCary-Hiroyuki TagawaGary Daniels
Full Cast & Crew

Captain America: The Winter Soldier
After the cataclysmic events in New York with The Avengers, Steve Roge...

TEKKEN
In the year of 2039, after World Wars destroy much of the civilization...

Need for Speed
The film revolves around a local street-racer who partners with a rich...

The Amazing Spider-Man 2
For Peter Parker, life is busy. Between taking out the bad guys as Spi...

Divergent
In a world divided into factions based on personality types, Tris lear...

RoboCop
In RoboCop, the year is 2028 and multinational conglomerate OmniCorp i...