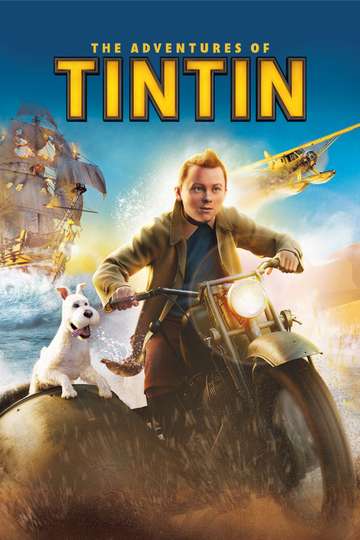 The Adventures of Tintin (2011)Stream and Watch Online Want to behold the glory that is 'The Adventures of Tintin' on your TV or mobile device at home? Hunting down a streaming service to buy, rent, download, or watch the Steven Spielberg-directed movie via subscription can be confusing, so we here at Moviefone want to do right by you.

Read on for a listing of streaming and cable services - including rental, purchase, and subscription choices - along with the availability of 'The Adventures of Tintin' on each platform. Now, before we get into all the details of how you can watch 'The Adventures of Tintin' right now, here are some finer points about the Paramount, Columbia Pictures, WingNut Films, Amblin Entertainment, Nickelodeon Movies, Hemisphere Media Capital, The Kennedy/Marshall Company, DreamWorks Pictures animation flick.

Released December 20th, 2011, 'The Adventures of Tintin' stars Jamie Bell, Daniel Craig, Andy Serkis, Nick Frost The PG movie has a runtime of about 1 hr 47 min, and received a user score of 68 (out of 100) on TMDb, which compiled reviews from 4,369 respected users.

What, so now you want to know what the movie’s about? Here's the plot: "From Academy Award® winning filmmakers, Steven Spielberg and Peter Jackson, comes the epic adventures of Tintin. Racing to uncover the secrets of a sunken ship that may hold a vast fortune, but also an ancient curse, Tintin and his loyal dog Snowy embark on an action-packed journey around the world that critics are calling."

How to Train Your Dragon
As the son of a Viking leader on the cusp of manhood, shy Hiccup Horre...

Ice Age: The Meltdown
Diego, Manny and Sid return in this sequel to the hit animated movie I...

The Smurfs
When the evil wizard Gargamel chases the tiny blue Smurfs out of their...

Rio
Captured by smugglers when he was just a hatchling, a macaw named Blu...

Ice Age: Continental Drift
Manny, Diego, and Sid embark upon another adventure after their contin...