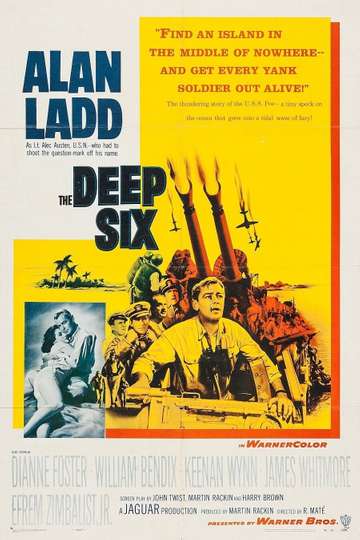 "We'll get there and we'll get 'em out!"
TMDb Score
42
NR 1 hr 45 minJan 15th, 1958War, Drama
The conflict between duty and conscience is explored in the WWII drama The Deep Six. Alan Ladd stars as Naval gunnery officer Alec Austin, a Quaker whose sincere pacifist sentiments do not sit well with his crew members. When he refuses to fire upon an unidentified plane, the word spreads that Austin cannot be relied upon in battle (never mind that the plane turns out to be one of ours). To prove that he's worthy of command, Austin volunteers for a dangerous mission: the rescue of a group of US pilots on a Japanese-held island. The ubiquitous William Bendix costars as Frenchy Shapiro (!), Austin's Jewish petty officer and severest critic. If the film has a villain, it is Keenan Wynn as ambitious Lt. Commander Edge, who seems to despise anyone who isn't a mainline WASP.
Show More
DirectorRudolph MatÃ©
StarringAlan LaddDianne FosterWilliam Bendix
Full Cast & Crew