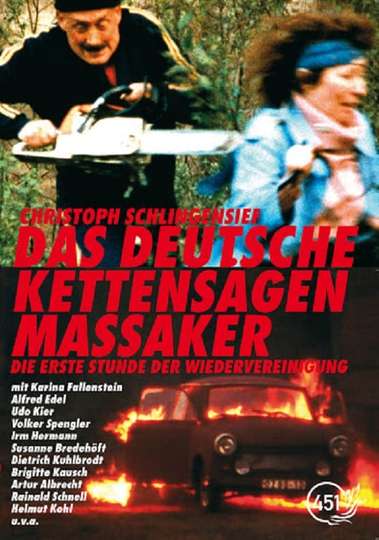 Fancy watching 'The German Chainsaw Massacre' in the comfort of your own home? Tracking down a streaming service to buy, rent, download, or watch the Christoph Schlingensief-directed movie via subscription can be a huge pain, so we here at Moviefone want to do the heavy lifting.

We've listed a number of streaming and cable services - including rental, purchase, and subscription options - along with the availability of 'The German Chainsaw Massacre' on each platform. Now, before we get into the fundamentals of how you can watch 'The German Chainsaw Massacre' right now, here are some specifics about the DEM Film, Rhewes Filmproduktion, Hymen II horror flick.

Released , 'The German Chainsaw Massacre' stars Karina Fallenstein, Susanne BredehÃ¶ft, Artur Albrecht, Volker Spengler The movie has a runtime of about 1 hr 3 min, and received a user score of 40 (out of 100) on TMDb, which collated reviews from 16 top users.

Want to know what the movie's about? Here's the plot: "In "German Chainsaw Massacre" people meet up with a household of butchers. They detect low cost meat in the East Germans moving over the old boundary into the West and start turning them into sausage. Clara flees the slaying of her sleazy spouse and the rotting East, and lands in the arms of butchers. She is held alive simply because the daughter of the family falls in love with her. This German movie is a satirical massacre splatter flick that provides lots of inexpensive gore. It's full of political overtones and has a lot to Tobe Hooper's terror classic "The Hollywood Chainsaw Hookers". If you're a lover of German gore and absurdness, check it out!. 16 million East Germans on their way to the golden West. 4% never got there: were they turned into Wuerste (sausages)? If you knew Christoph Schlingensief's other movies like "United Trash" you will know what this is all about - some call it art, some trash. Shot in 14 days after October the 3rd 1990. With Udo Kier in a small role."

'The German Chainsaw Massacre' is currently available to rent, purchase, or stream via subscription on Pantaflix, Apple iTunes, and Amazon Video .