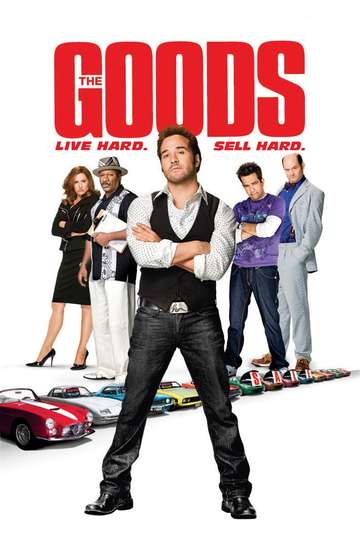 Yearning to watch 'The Goods: Live Hard, Sell Hard' on your TV or mobile device at home? Finding a streaming service to buy, rent, download, or watch the Neal Brennan-directed movie via subscription can be tricky, so we here at Moviefone want to do the heavy lifting.

Below, you'll find a number of top-tier streaming and cable services - including rental, purchase, and subscription alternatives - along with the availability of 'The Goods: Live Hard, Sell Hard' on each platform when they are available. Now, before we get into the various whats and wheres of how you can watch 'The Goods: Live Hard, Sell Hard' right now, here are some finer points about the Paramount Vantage, Kevin Messick Productions, Gary Sanchez Productions comedy flick.

Released August 14th, 2009, 'The Goods: Live Hard, Sell Hard' stars Jeremy Piven, Ving Rhames, James Brolin, David Koechner The R movie has a runtime of about 1 hr 30 min, and received a user score of 54 (out of 100) on TMDb, which assembled reviews from 164 well-known users.

You probably already know what the movie's about, but just in case... Here's the plot: "Don Ready is many things, but he is best-known as an extraordinary salesman. When a car dealership in Temecula teeters on the brink of bankruptcy, he and his ragtag team dive in to save the day. But what Ready doesn't count on is falling in love and finding his soul."

Jeff, Who Lives at Home
"The first step to finding your destiny is leaving your mother's basement."
The Thomas Crown Affair
"How do you get the man who has everything?"

The Campaign
"May the best loser win."
A Perfect Getaway
"Welcome to paradise. Enter at your own risk."
Your Highness
"Get your quest on."

Wedding Crashers
"Life's a Party. Crash It."
The Losers
"Anyone Else Would Be Dead By Now."

Youth in Revolt
"Every "Revolution" Needs A Leader"

Starsky & Hutch
"They're the man."

Semi-Pro
"Putting the funk into the dunk."
Faster
"Slow justice is no justice"

Anchorman: The Legend of Ron Burgundy
"They bring you the news so you don't have to get it yourself."
Unthinkable
"Right and Wrong no longer exist"
The Ladies Man
"He's cool. He's clean. He's a love machine."

Talladega Nights: The Ballad of Ricky Bobby
"The story of a man who could only count to #1."
Step Brothers
"They grow up so fast."

Old School
"All the fun of college, none of the education."

Anchorman 2: The Legend Continues
"It's kind of a big deal"
Cop Out
"Rock out with your Glock out"