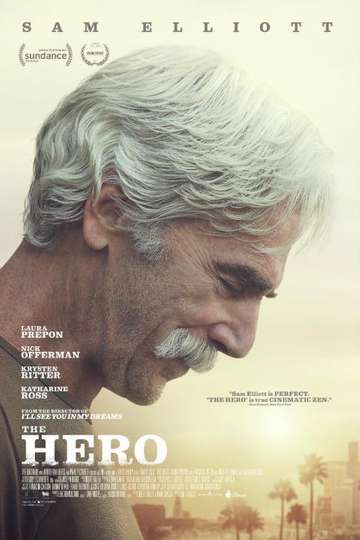 The Hero (2017)Stream and Watch Online Looking to watch 'The Hero' on your TV, phone, or tablet? Finding a streaming service to buy, rent, download, or view the Brett Haley-directed movie via subscription can be confusing, so we here at Moviefone want to do right by you.

We've listed a number of streaming and cable services - including rental, purchase, and subscription alternatives - along with the availability of 'The Hero' on each platform. Now, before we get into the fundamentals of how you can watch 'The Hero' right now, here are some particulars about the Northern Lights Films, Park Pictures Features, Houston King Productions drama flick.

Released January 21st, 2017, 'The Hero' stars Sam Elliott, Laura Prepon, Nick Offerman, Krysten Ritter The R movie has a runtime of about 1 hr 37 min, and received a user score of 61 (out of 100) on TMDb, which collated reviews from 170 knowledgeable users.

What, so now you want to know what the movie’s about? Here's the plot: "Lee, a former Western film icon, is living a comfortable existence lending his golden voice to advertisements and smoking weed. After receiving a lifetime achievement award and unexpected news, Lee reexamines his past, while a chance meeting with a sardonic comic has him looking to the future."

Churchill
A ticking-clock thriller following Winston Churchill in the 24 hours b...

Maudie
Canadian folk artist Maud Lewis falls in love with a fishmonger while...

Barbie Video Game Hero
Get ready to power up! When Barbie magically gets pulled into her favo...

Breathe
Based on the true story of Robin, a handsome, brilliant and adventurou...

Beatriz at Dinner
Beatriz, an immigrant from a poor town in Mexico, has drawn on her inn...

The Glass Castle
A young girl is raised in a dysfunctional family constantly on the run...

Ashton Kutcher Announces His Netflix Series 'The Ranch' Is Ending