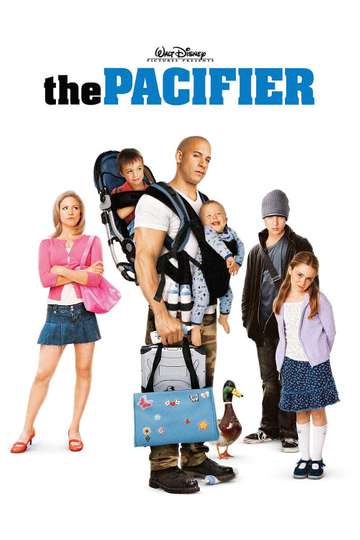 The Pacifier (2005)Stream and Watch Online

Want to watch 'The Pacifier' on your TV or mobile device at home? Tracking down a streaming service to buy, rent, download, or watch the Adam Shankman-directed movie via subscription can be tricky, so we here at Moviefone want to do right by you.

Below, you'll find a number of top-tier streaming and cable services - including rental, purchase, and subscription choices - along with the availability of 'The Pacifier' on each platform when they are available. Now, before we get into the nitty-gritty of how you can watch 'The Pacifier' right now, here are some specifics about the Walt Disney Pictures, Spyglass Entertainment family flick.

You probably already know what the movie's about, but just in case... Here's the plot: "Navy SEAL Shane Wolfe is handed a new assignment: Protect the five Plummer kids from enemies of their recently deceased father -- a government scientist whose top-secret experiment remains hidden in the kids' house."

Cheaper by the Dozen 2
"Same Big Family... Even Bigger Adventure."

Cheaper by the Dozen
"Growing pains? They've got twelve of them!"
If I Met a Magician
The Wisdom of the Pretzel

The Game Plan
"Half his size, twice the trouble ... and she's moving in."
My War Hero Uncle
Freaky Friday
"Mondays are manic. Wednesdays are wild. And Fridays are about to get a little freaky."
Frozen Days