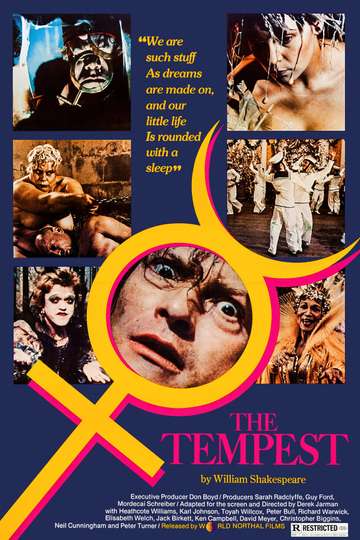 The Tempest (1979)Stream and Watch Online

Looking to feast your eyes on 'The Tempest' on your TV, phone, or tablet? Finding a streaming service to buy, rent, download, or view the Derek Jarman-directed movie via subscription can be challenging, so we here at Moviefone want to help you out.

We've listed a number of streaming and cable services - including rental, purchase, and subscription alternatives - along with the availability of 'The Tempest' on each platform when they are available. Now, before we get into all the details of how you can watch 'The Tempest' right now, here are some particulars about the Boyd's Company drama flick.

Released September 13th, 1979, 'The Tempest' stars Peter Bull, David Meyer, Neil Cunningham, Heathcote Williams The movie has a runtime of about 1 hr 35 min, and received a user score of 66 (out of 100) on TMDb, which compiled reviews from 15 well-known users.

Curious to know what the movie's about? Here's the plot: "Prospero, a potent magician, lives on a desolate isle with his virginal daughter, Miranda. He's in exile, banished from his duchy by his usurping brother and the King of Naples. Providence brings these enemies near; aided by his vassal the spirit Ariel, Prospero conjures a tempest to wreck the Italian ship. The king's son, thinking all others lost, becomes Prospero's prisoner, falling in love with Miranda and she with him. Prospero's brother and the king wander the island, as do a drunken cook and sailor, who conspire with Caliban, Prospero's beastly slave, to murder Prospero. Prospero wants reason to triumph, Ariel wants his freedom, Miranda a husband; the sailors want to dance."

'The Tempest' is currently available to rent, purchase, or stream via subscription on Kanopy, and Tubi TV .