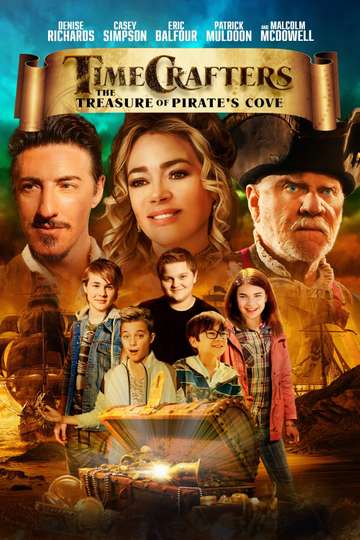 TimeCrafters: The Treasure of Pirate's Cove (2020)Stream and Watch Online

Want to behold the glory that is 'TimeCrafters: The Treasure of Pirate's Cove' in the comfort of your own home? Searching for a streaming service to buy, rent, download, or watch the Rick Spalla-directed movie via subscription can be tricky, so we here at Moviefone want to do the work for you.

Below, you'll find a number of top-tier streaming and cable services - including rental, purchase, and subscription alternatives - along with the availability of 'TimeCrafters: The Treasure of Pirate's Cove' on each platform when they are available. Now, before we get into the nitty-gritty of how you can watch 'TimeCrafters: The Treasure of Pirate's Cove' right now, here are some particulars about the HIP Films adventure flick.

Released December 12th, 2020, 'TimeCrafters: The Treasure of Pirate's Cove' stars Denise Richards, Malcolm McDowell, Patrick Muldoon, Eric Balfour The movie has a runtime of about 1 hr 45 min, and received a user score of 81 (out of 100) on TMDb, which compiled reviews from 4 respected users.

Curious to know what the movie's about? Here's the plot: "While searching for lost treasure, time traveling pirates end up in the modern day and do battle with unlikely foes: a group of kids with the latest in techy gadgetry."