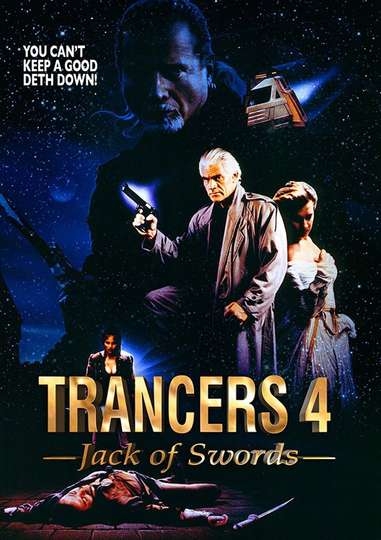 Fancy watching 'Trancers 4: Jack of Swords' in the comfort of your own home? Hunting down a streaming service to buy, rent, download, or view the David Nutter-directed movie via subscription can be a challenge, so we here at Moviefone want to help you out.

We've listed a number of streaming and cable services - including rental, purchase, and subscription options - along with the availability of 'Trancers 4: Jack of Swords' on each platform when they are available. Now, before we get into the nitty-gritty of how you can watch 'Trancers 4: Jack of Swords' right now, here are some specifics about the Full Moon Entertainment science fiction flick.

Released February 2nd, 1994, 'Trancers 4: Jack of Swords' stars Tim Thomerson, Stacie Randall, Ty Miller, Terri Ivens The R movie has a runtime of about 1 hr 23 min, and received a user score of 52 (out of 100) on TMDb, which collated reviews from 18 top users.

What, so now you want to know what the movie's about? Here's the plot: "Jack is now back in the future. He had since lost Lena, and finds out that he's lost his other wife Alice to none other than Harris. While heading out for another assignment, something goes awry with the TCL chamber. Jack finds himself in a whole new dimension. He also runs across a different version of trancers. These guys seem to be in control of this planet. Jack manages to assist a rebel group known as the "Tunnel Rats" crush the rule of the evil Lord Calaban."

'Trancers 4: Jack of Swords' is currently available to rent, purchase, or stream via subscription on ARROW, Amazon Video, The Roku Channel, Pluto TV, and Redbox .