Moviefone speaks with Alison Brie about her new movie. “I was drawn to the idea of following a character who doesn't take a lot of action in her life.”

Opening in theaters, VOD, and streaming on AMC+ beginning August 19th is the new romantic comedy ‘Spin Me Round,’ which was co-written by actress Alison Brie (‘Promising Young Woman’), and co-written and directed by Jeff Baena (‘Horse Girl’).

The new movie follows Amber (Brie), the manager of an Italian restaurant chain who wins the opportunity to attend the franchise’s educational immersion program in Italy.

But what she thought would be an exciting getaway devolves into chaos when she begins a romantic triangle with the restaurant chain's wealthy owner Nick (Alessandro Nivola) and his assistant, Kat (Aubrey Plaza).

In addition to Brie, Nivola, and Plaza, the cast also includes Molly Shannon (‘Me and Earl and the Dying Girl’), Lil Rel Howery (‘I Love My Dad’), Tim Heidecker (‘Ant-Man and the Wasp’), Tricia Helfer (‘Battlestar Galactica’), and Fred Armisen (‘The Bubble’).

Moviefone recently had the pleasure of speaking with Alison Brie about her work on ‘Spin Me Around,’ writing the screenplay with director Jeff Baena, her character’s journey and romance with Nick, and working with Aubrey Plaza. 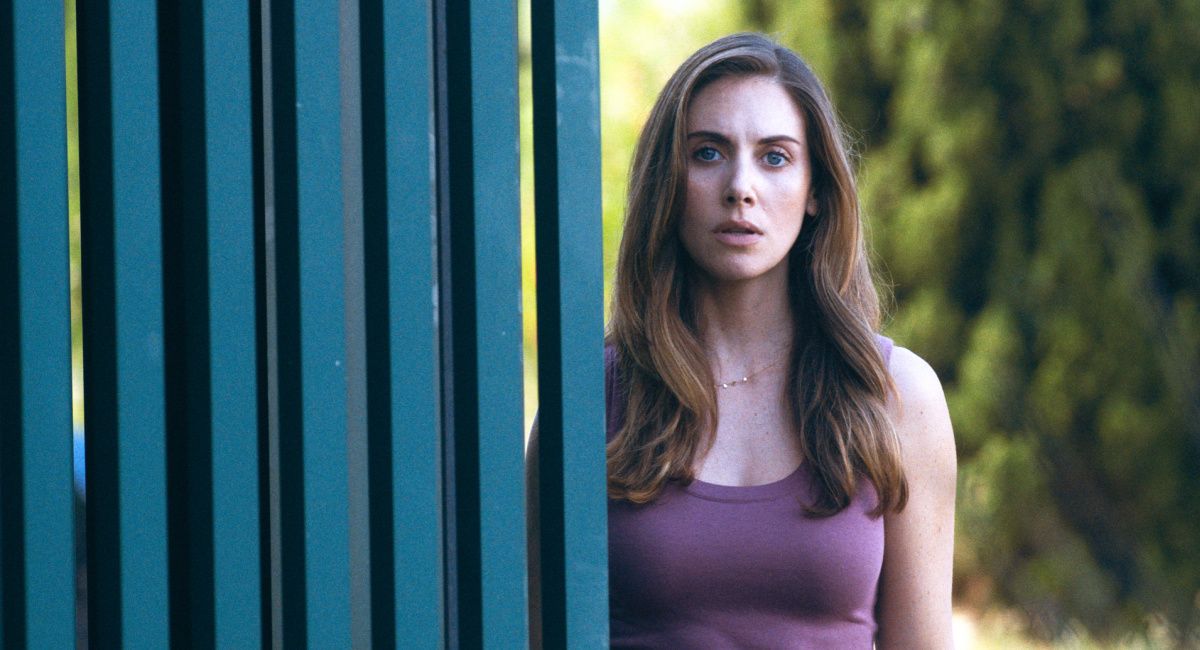 Alison Brie as Amber in 'Spin Me Round.'

You can read our full interview below or click on the video player above to watch our interviews with Alison Brie and co-writer and director Jeff Baena.

Moviefone: To begin with, can you talk about the genesis of the idea for the film and the process of writing the screenplay with director Jeff Baena?

Alison Brie: So, Jeff brought the idea to me, and it was something that he had been thinking about since we shot ‘The Little Hours’ in Italy. I think he had a strong desire to get back to Italy. He had read some articles about a similar immersive management program that may exist in real life, and how lackluster it might have been, or how Americanized it might have been.

He saw a great idea in bringing a fun ensemble together to watch them navigate that kind of program. When he brought me into the fold, I think I was really drawn to the idea that the movie is going to take this journey through a bunch of different genres, and that we're following a character who doesn't take a lot of action in her life.

She just lets things happen to her, but over the course of this movie, she tries to take her destiny into her own hands, but it ends in total chaos. I also really liked the idea of unfulfilled expectation. Something we were playing with is that sometimes when you take a big trip, you think it's going to be really life changing and that you're going to get back on the other side as a totally different person, and often, that doesn't happen.

In life versus the movies, you get home and your life is kind of the same. I think we wanted to show that there actually can be an internal shift, however subtle, even if there's not an external shift.

MF: Can you talk about the journey that Amber goes on and how it changes her through the course of the movie?

AB: We're watching Amber become a more self-empowered person, ultimately. At the start of the film, you get the sense that she's really stuck. She's been a manager at this Italian restaurant chain for nine years. She is a bit of a pushover. She tried to start another restaurant with her boyfriend, but that wasn't really her idea. She has trouble saying no to people. She goes with the flow too much. She's not going to take her life into her own hands.

Through her experiences on this trip, and the people that she meets, specifically Aubrey Plaza's character, I think she kind of sees a different type of dangerous person and is a little bit inspired by that. At the end of the film, it's like the trip isn't going to change the fact that she works at this restaurant. So, it doesn't get her out of debt, but I do think there is a subtle enough shift of her starting to empower herself, have a voice and say the things that she wants.

(L to R) Aubrey Plaza as Kat and Alison Brie as Amber in 'Spin Me Round.'

MF: Can you talk about Amber’s sudden friendship with Kat and working on that odd relationship with Aubrey Plaza?

AB: We always had Aubrey in mind for the role. So, it's always nice when you get to write a character for an actor. But it's so fun to work with Aubrey. She's such a great actress, and she brings a really exciting, impulsive kind of energy to all of her roles that is really unexpected.

So, it's really easy to shoot scenes with her, and she and I have worked together a bunch before. So, it's really comfortable and fun. I think, with those scenes, it's sort of the rawest that you see my character. She goes into this trip being fed movies like ‘Eat, Pray, Love,’ and you get the sense that maybe she watches ‘The Bachelorette’ and ‘The Bachelor’ a lot, and that's kind of what she has in mind for this trip.

Aubrey's character shakes it up, and you see her feeling real things in the moment that she hasn't maybe felt before. She gets a bit of inspiration from her character, and the way that she just is unabashedly who she is.

MF: Finally, can you talk about Amber and Nick’s relationship, how he is able to win her over, and how she feels when she discovers his true intentions?

AB: Poor Amber is so naive, but I also think there's a sense to her that is just too polite also. Some of the interactions that she has early on in the movie with Nick are based on real interactions that I've had with men in life when I was much younger. I think that she wants to be naive, because the prospect of this rich, handsome, restaurateur sweeping her off her feet is very exciting. She's able to ignore the red flags, because she's just the type of person who is uncomfortable with rocking the boat, no pun intended.

So, it takes her a little while longer to realize what's going on with Nick. It really takes a lot of courage from her, again, not being a person who ever speaks up for herself or asserts herself. It takes a lot to get her to say anything. She almost would rather think that a whole different set of things were going on than admit what was in front of her.

(L to R) Alessandro Nivola as Nick Martucci and Alison Brie as Amber in 'Spin Me Round.'