‘Eternals’ Review: Too Many Characters And Bad Visuals Make For A Disappointing Film

One can only hope this is a failure solely based on Chloé Zhao being the wrong filmmaker to work within the confines of the Marvel machine, and not a sign of things to come from her in the future. 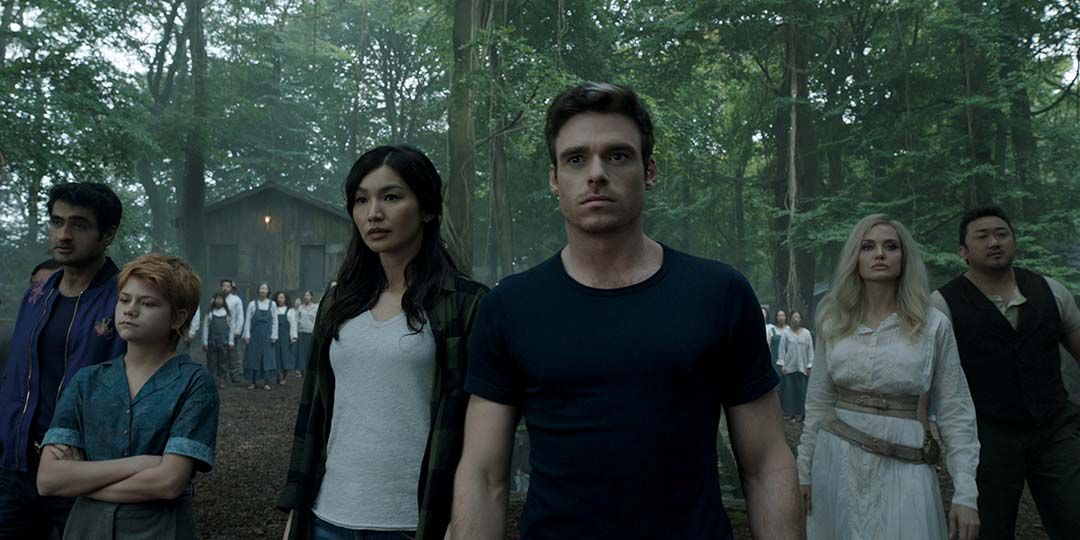 Drowning in too many characters, convoluted plotting and disappointingly bad visuals, Chloé Zhao’s ‘Eternals,’ based on comic book characters created by Jack Kirby in 1976, follows a group of immortal aliens who have spent the last seven thousand years protecting the humans of Earth from evil, primitive, animalistic creatures called Deviants. They seemingly accomplish their mission, forcing the Deviants into extinction. As the film progresses the group learns more about the true nature of their mission, the Deviants return, bigger and badder than ever, and the heroes must learn to face the most human of all traits: free will.

Zhao’s cast is filled with mostly character actors who finally get an A-list treatment. At the center is Gemma Chan as an empathetic Sersi who can manipulate matter through physical contact. Chan is an intriguing actress who often brings complex emotions to her characters, so the casting is apt, though unfortunately the film rarely allows her the time to feel like a true protagonist. Same goes for Richard Madden, as her sometime love interest Ikaris, who much like in Greek mythology can fly, but also harbors some dark secrets. Madden is all brooding looks, an immortal Superman-esque sadboy.

Much hype was made of Kumail Nanjiani's physical transformation as Kingo, who can shoot cosmic energy from his hands, and for the last hundred or so years, has built himself up as an acting dynasty in Bollywood. Nanjiani is the actor best suited for the witty banter that has become a trademark of the MCU, but much of his one-liners land flat amongst a cast ill-prepared to match him snap for snap. Bollywood mainstay Harish Patel often steals the show as Kingo’s manager Karun, who is effortlessly funny, yet also adds some much-needed poignancy to the film’s more emotionally urgent moments.

Brian Tyree Henry does the best he can as Phastos, a scientist and the MCU’s first openly queer character. It’s a pity that he has absolutely no chemistry with his on-screen husband, and is mostly strapped with fairly hetreonormative ideas of queer life. In perhaps the film’s most absolutely ill-conceived scene, not only does he blame his technology for the bombing of Hiroshima, Zhao shoots the sequence with him being comforted amongst the bleak, blasted remains of thousands of nameless Japanese.

Also, for a film touted as queer representation, Zhao’s insistence on pairing off all the Eternals into heteronormative couplings, as if the only outcome of spending thousands of years together is that the male-presenting and female-presenting immortal beings will eventually end up together, feels like a slap in the face. I’d almost rather go back to a sexless MCU than this aggressive heteronormativity.

The biggest disappointment in terms of untapped potential is Barry Keoghan as Druig, who can manipulate the minds of others. Keoghan is a once-in-a-generation presence on screen. There is currently no one doing unsettling like him, and you can see glimmers of what makes him such a beguiling presence on screen every so often. Yet it seems Zhao is determined to damper the unique energies of her performers, to turn down their shine until they all feel like a similar shade of bland.

Lia McHugh plays Sprite, a pixie who can project life-like illusions but is forever trapped in the body of a pre-teen girl. There’s an episode of 'Highlander: The Series' that is more nuanced in the way it explores what it's like to be an immortal child, if you’re interested in seeing this story done well. We’ve also got the MCU’s first deaf character in Makkari (Lauren Ridloff), who can run really, really fast. That’s pretty much all we get to know about her. Also, she’s after some green tablet, but we never find out what its significance is.

Then there is Salma Hayek, at the helm of the group, as Ajak. She communicates with their leaders, the Celestials, and has hidden the true nature of their mission from the heroes. She’s also barely given anything to do beyond a few stern speeches to her team. How you waste a star like Hayek would be the biggest mystery in the film if it didn’t also star Angelina Jolie. How can you cast a star with her megawattage as Athena - here called simply Thena - the goddess of war, and make her so dull is truly one for the ages. Aiming for shell-shocked and wise, Jolie’s performance is undercut every time she begins to do something remotely interesting, as Zhao’s camera cuts away to something else. Even her connection with fellow Eternal Gilgamesh (Don Lee) is so undercooked it’s hard to see why he’d sacrifice anything for her, and later why she’d be moved to seek revenge for him.

Hampered by too many characters, the plot is equally underdeveloped beyond the major beats. After learning the true purpose of their existence, suddenly our heroes have a ticking clock set before the actual end of the world. This is where American exceptionalism becomes human exceptionalism, and the safety of our planet is weighed as more important than thousands of other civilizations waiting to be born. Okay. Sure. I guess that makes sense when all the terrible things humans have actually done to the planet, like the melting of the ice caps, are easily explained away by the Celestials’ actions. It’s easier to see us as better than we are when there’s a big bad out there in space actually to blame.

More disappointing than any of the ham-fisted plotting or underdeveloped characterization, is the filmmaking itself. The stunning compositions and natural light that permeate Zhao’s earlier films made with long-time cinematographer Joshua James Richards are rendered flat under the weight of the Marvel house style, mostly lensed by Ben Davis. Even the shots in South Dakota have none of the majesty we know Zhao and Richards have brought to the location in the past. How everything that felt fresh and unique and uncompromising in her earlier films is completely lacking in this film serves as a testament to how important the collaboration between director and cinematographer can truly be.

Ultimately, ‘Eternals’ is a story about how empathy is the greatest strength of all, unfortunately that lesson is hampered by the physical strength-based action set pieces on which the MCU has built its style. One can only hope this is a failure solely based on Zhao being the wrong filmmaker to work within the confines of the Marvel machine, and not a sign of things to come from her in the future.

'Eternals' is now in theaters.