Actor and musician Jackson Rathbone discusses his new film ‘Warhunt,’ which also stars Robert Knepper and Mickey Rourke, and will be available on digital and on demand January 21st. 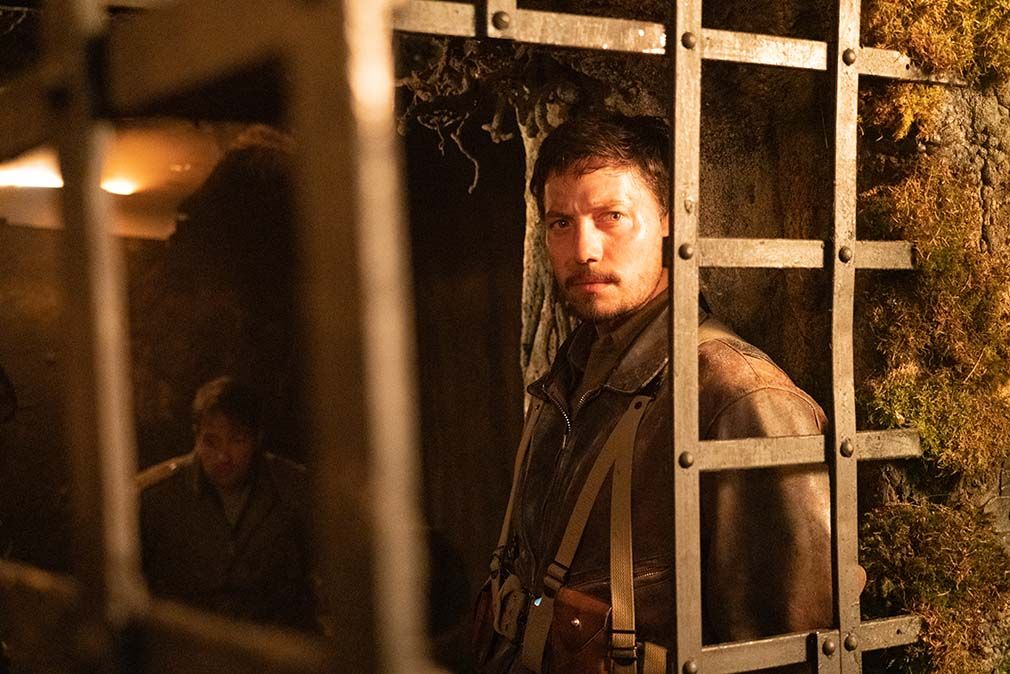 Directed by Mauro Borrelli (‘The Recall’), the movie follows a squad of US military soldiers who go behind enemy lines during WWII to retrieve top secret material from an airplane crash. They soon find themselves viciously attacked by a coven of witches, who they must defeat before the Nazis can capture them and use their power to take over the world.

Actor Jackson Rathbone has appeared in several films and television shows including ‘Dread,’ ‘The Last Airbender,’ ‘Mixtape,’ and TNT’s ‘The Last Ship.’ But he is probably best known for playing Jasper Hale in ‘Twilight’ and its four sequels. But Rathbone is not just an accomplished actor, he is also a successful musician and a member of the Los Angeles funk rock band, 100 Monkeys.

Moviefone recently had the opportunity to speak with Jackson Rathbone about his work on ‘Warhunt,’ as well as acting opposite Robert Knepper and Mickey Rourke, and shooting the movie during Covid.

You can read the full interview below, or watch the video by clicking the player above.

MOVIEFONE: To begin with, I understand that the pandemic began just as you were in the middle of shooting this movie. Can you talk about how Covid affected the production?

We were up in Latvia, so we were in Europe. Then suddenly, we had actors dropping out of the film to go be with their families. It was literally like we were dropping actors every day for a couple weeks before finally they shut down production. So, it really had this sense of a group of soldiers going into the woods, and then dropping like flies. It definitely added to the terror. There was a real sense of dread on set a lot of days.

We had to stop filming halfway through the film, almost exactly. Then there was about two months where we were off, and they figured out the rules and regulations of testing. Luckily, Latvia, where we were filming, had very little to no cases. So, we went back after two months.

It was still the height of the pandemic, but oddly enough, it felt very safe. We were being tested every other day, (we had) masks, and the whole nine yards. We were one of the first productions to, I think, resume. But it was definitely nerve-wracking. It was a strange time, and it still is.

MF: Since you are playing a group of soldiers with a close bond to each other, did the pandemic help bring the cast closer together?

JR: Oh, for sure. One of other actors and I, Ben McKeown, we have a lot of work to do in the third act together. We started meeting every day for the gym. We were hitting the gym, and then every third day going for cheeseburgers to offset the gym work we had done. It was just that sense of comradery and familiarity with one another, even though we have a tense relationship on screen.

I really find that if you have a good relationship off screen, the tenseness on screen actually gets way better and much more intense because you trust each other more. So, there’s a scene where he throws me across the room. I trusted him, and I went with it. I actually did a lot of the moves myself, and so did he. We worked hard on it.

MF: Can you talk about working with veteran actor Robert Knepper and what did you learn from the experience of acting on screen with him?

JR: Getting to work with Robert Knepper, I learned so much just seeing him perform and getting to watch a man like that, an actor like that, really dig in. It was fantastic. He was so kind to me, and took me out to dinner a few times, and we talked about our characters. It's funny because he and I loved each other. You call cut, we're hugging, but on action, we're just headbutting each other right and left. It was a lot of fun.

Working with Robert, it was a dream come true because whenever I look at projects, there's so many different things that I consider. I know I'm only getting older, but I like to always consider myself a young actor at heart, by which I mean, I'm going to learn. I want to always learn from people, and see what they do that I love, and I hopefully can take it and bring it into my own repertoire.

So, I remember doing a scene with Robert where we're burying some of our dead. He's doing this speech about the Americans and the Nazis fighting during Christmas and how they put down their weapons for a day or two and sang Christmas carols together. Then they went back to blowing each other's brains out.

The way he did it, and the way it was written, couldn't have been more polar opposite. He brought such humanity and a sense of awe to the speech that watching him perform it, I was literally just like, "Okay, wow.” Because his face, he just registered so much and there were no lies whenever he was in character. That's the hardest thing, you stand where they tell you to stand, wear what they tell you to wear, but you never lie.

MF: What was your experience like acting with Oscar nominee Mickey Rourke?

JR: I'm going to tell you, a great sadness for me is I never actually got to work with Mickey Rourke because our schedules missed each other due to the pandemic. They had to film his part and my part separately because of the laws of the country when they were letting us back in. So, I wasn't allowed to be in the country whenever he was. It's this crazy bureaucracy stuff that we got stuck with, but I got to work with his stand-in who was a wonderful Latvian theater performer.

I watched the film with my wife. She couldn't believe that we had never been in the same room together. She was just like, "Are you kidding?" I was like, no, they just spliced it together. They did the movie magic. It was fun though, getting to see him chomp on those cigars, and wear his crazy eye patch. He’s an intense guy, and the stories I heard, well, they ran the gamut. Let me tell you, that guy's a legend!

MF: Finally, can you talk about working with director Mauro Borrelli on this project?

JR: He's a passionate Italian man, and he had so much energy on set. He wanted to try just thousands of different things. He wanted to move the camera so many times. There were so many grand ideas he was trying to execute that it would've had to have been a three-hour movie.

When one of the men die in the opening, he imagined that they were an opera singer, and that he wanted to have them dying while singing an operatic ballad, and have that tie in. That didn't make the final cut of the movie, but it's one of those things where he's just a very passionate man, and to have someone so passionate at the helm, it can be a great thing.