Rusche talks about how she got started, and why she loves shooting movies in New York City. 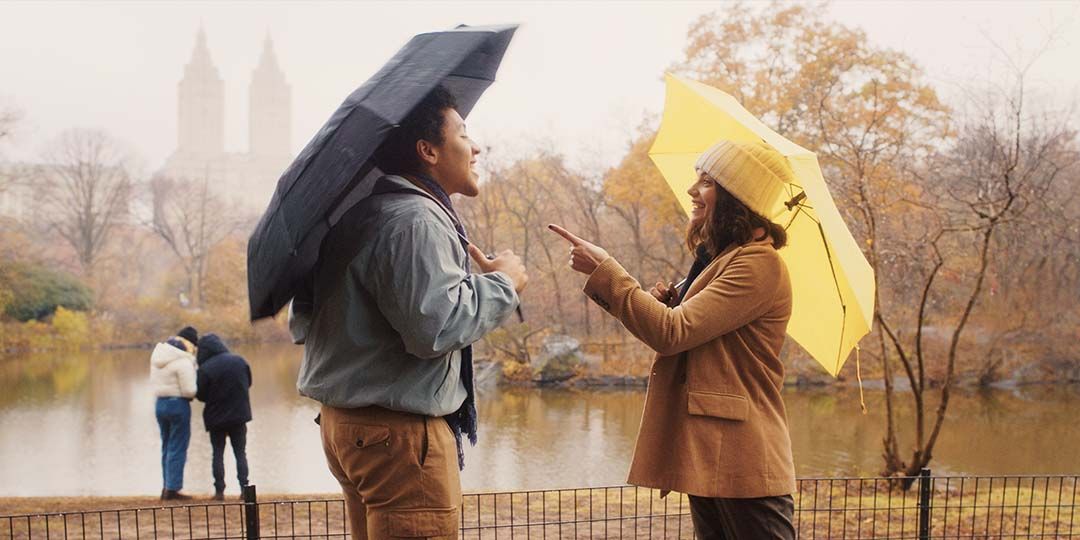 Cuban-American Maria Rusche grew up outside of Boston and began her work in film as a gaffer and lighting technician. Based in Brooklyn, she has a degree from NYU’s Tisch School of the Arts, where she was also an adjunct professor of cinematography from 2018 until 2021. Her work shooting on location in New York City is beautifully demonstrated in the film tryptic ‘Milkwater,’ ‘Shiva Baby’, and most recently ‘Dating & New York’. Rusche spoke to Moviefone about her work on feature films and past, present, and future for women cinematographers in the industry.

Moviefone: How did you get into filmmaking and specifically cinematography?

Maria Rusche: I got interested in filmmaking when I was a kid. I would make movies with my friends. Usually comedies or mockumentaries. That was what I was drawn to at the time. I had a cousin who was an editor, so I thought maybe I’ll go to film school and be an editor. I think people on the outside don’t have a sense of what other roles there are in filmmaking. When I got to film school, I realized what a cinematographer does, which translates a script into a visual world with the director and the production designer. What’s specific about this role, is you are then decimating this information to an entire crew of folks who have to work together to make that happen. I played a lot of team sports growing up, so I felt very at home with that part of the process. I started shooting in film school and then went with it from there. I did a lot of lighting work as well. Coming up, I was a gaffer and electrician, which helped me with experience in lighting.

MF: Did you have any mentors?

Rusche: I have been lucky enough to have a number of women who have been supportive and helpful along the way. A friend of mine, Dagmar Weaver-Madsen, who shot ‘High Maintenance,’ is a really talented DP and very generous. I met her when I was still in film school. I ended up gaffing a few projects for her. I think that kind of support and mentorship is really crucial, especially for cinematographers. It’s hard to get a foothold in the industry. As a second child, I learn really well from someone else work, so to see someone else who looked like me doing that job was really inspiring.

MF: Can you talk about your collaboration with director ​​Jonah Feingold on ‘Dating & New York’?

Rusche: When Jonah and I first met, which was in Washington Square Park and feels very apropos for this movie, we talked a lot about loving rom-coms. He’s really a ‘When Harry Met Sally…’ kind of guy. I definitely felt very embarrassed in film school talking about romantic comedies. It was such a breath of fresh air to talk to someone who also loves these movies and realize there is as much depth in a romantic comedy as there is in a drama. We really bonded over a lot of shared movie references. ‘(500) Days of Summer' felt stylistically very appropriate because of the way that they incorporate elements of magical realism and surreal, fantastical moments. The cinematography supports that tone. Jonah is really great at creating an environment where you can really try anything. That’s how we approached the script in pre-production. We tried to push ourselves past the first thing that came into our heads of the standard way to cover a scene, but rather how can we build a romantic, surreal version of New York that it feels like when you’re falling in love with someone. That was really how we approached the blocking and shooting of each scene.

MF: This film was shot over 15 days in 20 locations across NYC. That feels like a lot.

Rusche: Yeah, I think pre-production is crucial for making that kind of schedule work. We were really diligent about our location scouting and pre-production. We would go through the script scene by scene and talk through exactly what the point of each scene was, where it fits in the story, and what we were trying to get across. Having that sacred understanding of each beat we were trying to hit, in addition to having our shot list going into each scene, we were able to pivot easily and move very quickly. If we had to cut a short or two, we knew what we needed to get across. I also had been lucky enough to work with my crew for a long time, and that helps with being efficient communication-wise.

MF: Were there any happy accidents in terms of locations or lighting in the locations as you were shooting?

Rusche: Jonah was really open to new ideas that popped up, because he was not married to anything, that gave us the opportunity to really embrace things that would happen on the day. One of my favorite scenes was the ferry scene. When you set a scene in such a visually interesting and evocative location, you are able to find ways to capture that romantic feeling of being on the ferry with your friend and living in this idyllic moment. We knew what we wanted to get across with the scene, so we were able to adapt with the conditions on the ferry, which was totally chaotic.

MF: ‘Shiva Baby’ has a very different feel and much fewer locations. Can you talk about working with Emma Seligman on that film?

Rusche: Again, focusing during pre-production was really crucial. Because it was just the one location, it did give us an opportunity to be so well versed in the space. Emma and I were able to spend a ton of time at the location and see different ways to cover people in the space, how to block people in ways that helped move the story forward. The danger of a one location movie is that it can be boring. We had to figure out how to build tension and still feel like the story was progressing despite being in just one location. We did that through lighting. The shiva starts out more of a cooler feel, the windows are open, and the feeling in there is that it’s a little somber. As Danielle (Rachel Sennott)’s intensity and anxiety increases over the course of the shiva, we wanted to exaggerate the warmth that builds throughout her experience. We built that into the lighting plan as people light candles as the shiva starts and culminates in a climatic moment where Danielle finally loses it.

MF: Morgan Ingari’s ‘Milkwater’ was also shot on location in NYC, mostly in a brownstone. How did you develop its look?

Rusche: The look for that film was definitely rooted in New York and in Brooklyn. We were really focusing on performances for that film, since Molly Bernard is so brilliant and we wanted to give her opportunity to shine. We definitely had a similarly warm, somewhat romantic look for that movie as Molly is coming out to her family.

MF: What do you think is so compelling about location shooting in New York?

Rusche: I feel like if you’re not cramming into a bathroom in Brooklyn, did you really shoot in New York? I think that there is something a little bit magical to shooting on location because it gives you a little bit of authenticity. You never know what you are going to find in these locations. It’s hard to replicate the quirks of a real brownstone on a stage. There’s a special feeling of the city that you get from being able to shoot on location.

MF: Do you have any advice for women who might want to pursue work as a cinematographer?

Rusche: Spend time developing your own voice is really important. There is so much competition to become a cinematographer. There are tons of people who are skilled who can do the job and want to do the job. What sets you apart is your perspective and your taste. Also, don’t try to fit too hard into what you think you are supposed to do.

MF: Can you recommend other films shot by female cinematographers for our readers to seek out?

Rusche: I really like Autumn Durald’s work. She most recently shot the new ‘Loki’ series. I think her work is really smart and evocative. Zoë White shot the most recent season of ‘Westworld’ that was really incredible.

MF: There’s a lot more women working as cinematographers now, and I’m wondering if you think that it’s gotten any easier for women in the industry?

Rusche: We’ve definitely increased the number of women, but I still think we have a ways to go. I noticed that in terms of jumping to bigger budgets, there is still somewhat of a hesitancy to give an opportunity to shoot those projects to a woman. I think in some ways, men are still judged for their potential and women are judged on their resumes. I think that it’s exciting that there is a lot of new talent coming up and that there are more opportunities, and we can see a lot more women working, but I’m even more excited to see those women be given the top-tier jobs. That’s what I’m looking forward to.

‘Dating & New York’ is in select theaters and available to rent online now.