The actors and director talk about how their previous work together helped reach some heavy emotions on set.

In ‘The Starling,’ Melissa McCarthy & Chris O’Dowd play a couple that have suffered a terrible tragedy, and are struggling to find a way forward. The two actors and their director talked to Moviefone about their new movie.

First up, McCarthy & O'Dowd talk about their characters.

Moviefone: So, I love the movie because it is really about overcoming this tragedy. It's a beautiful story of love. How would you each describe your characters and how they face this tragedy individually?

Melissa McCarthy: I would say for me, playing Lilly, with someone who is going through an unimaginable loss and has chosen to kind of hunker down in her armor and just kind of stay in denial, keep it together because that was her role. I think it's busying yourself because if you stop for a minute, I think she thinks she will, and she probably would fall apart. And you know, it's also, I just thought the film... So definitely Ted handled just how many... Every shade, there's so many different shades of mental health issues that we need to look at and be like, we all have it. We all go through it. How do you reach out for help? And everyone's way out is not the same, but everyone needs someone to reach out. If it's a bird, if it's a husband, if it's a vet, you just need help. And it's okay to ask for it.

MF: How about you, Chris?

Chris O’Dowd: I play a character called Jack who's an elementary school teacher who probably never feels like his head has been quite right, or it's something within him hasn't been quite right. And then everything goes terribly wrong. And over the course of the story, he realizes the one thing that he has going for him is that he has a partner who loves him. And sometimes that's all you need to be at least functional and have some use to the world. And so we watch that journey unfold for the two of them. 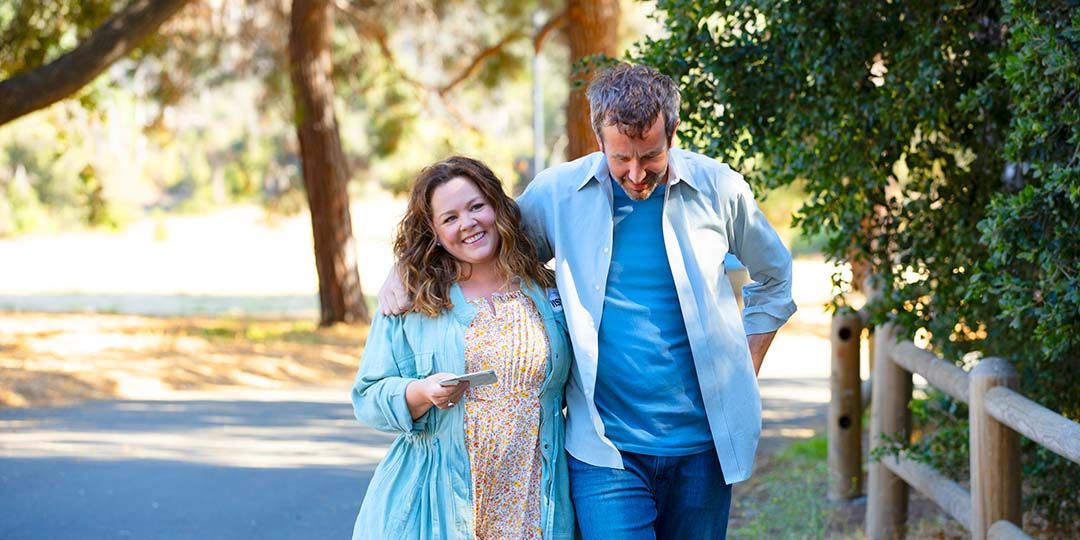 MF: What I found interesting is that originally with this script, the genders were actually switched. It was actually Lilly who would have been in New Horizons and then Jack, who would have been in Lilly's place, but Ted Melfi decided to flip the genders. And that's when I think Melissa, you signed on? But would you have still done the project had it stayed the way it was before?

McCarthy: I think it's still a beautiful story that Matt wrote either way. The story and the journey was just beautiful. I love that Ted switched it, and he said, it didn't ring true for him personally. Because he's just like, the women in his life are always the ones kind of buckling down and just keeping it together. I also thought that's a beautiful way to show that like it is perfectly okay and reasonable and real for a male character to just break down and to not be able to go forward. And I just thought it was... It seemed more relevant, certainly now than ever.

MF: I think it's definitely more unexpected, which I like. I love for things to be a little bit more unpredictable when it comes to film these days. And there were a lot of moments in this movie... I mean, not a lot, but there are a few where it's kind of funny, naturally funny, right? So was that a conversation that you had with the screenwriters and the director?

O’Dowd: I suppose one of the trickiest things with the film is trying to strike that balance right. You know, to be truthful to the tragedy while also being truthful enough to know that there is leveraging in all moments that exist. And without it, it can become not only maudlin, but somehow inauthentic. If you don't strike the balance between how this couple clearly are drawn to each other, because they share humor and as anybody who's been at a wake knows, humor comes from all places. So it's definitely something that we were very conscious of moving forward. But with Ted and with Mark and Melissa, it always felt like we were getting the balance about right.

Director Ted Melfi talks about what changed from the original story.

Moviefone: So, I love The Starling. It's a beautiful story about overcoming tragedy. It's a story about love, but as the director of this film, how would you describe it?

MF: I would love to ask you about finding that balance, and having a little bit of an organic humor to the film, to ground it in reality.

Melfi: Yeah. I find that humor is like the way in, right? So, you have a very heavy subject matter. Like, you even think of the movies I've done. You think of St. Vincent, right? It's about an alcoholic Vietnam vet whose wife passes away. That's so... If I tell you the story of The Starling out loud, a couple mourning the loss of their child, how could you watch that movie without humor? How could you be... How could you find that movie accessible without humor? How could you find anything that's that deep and dramatic, and traumatic accessible? That's why we laugh at funerals, right? It's just too much. It's just too much.

Melfi: So, you just try to find a balance. I don't think it's any kind of special skill of mine. I'd like to take credit for it, but I can't. It's just how I see life. I see life as like, you laugh one minute, and you cry in the next minute. And sometimes you don't even understand what the hell you're doing, but that's what you do.

MF: I agree, the discomfort is so much that you just have to laugh.

MF: I'm also curious about your decision to switch the genders. So, in the original script, Lilly and Jack were opposite. Why did you decide to flip it?

Melfi: Because when I read it, I read it eight years ago, and then I reread it right before we were going to make it. And I thought, "Oh, it's just like something's not right." It just feels cliché, to have the strong man at home, holding down the fort, and the weaker perceived woman taking a mental time out. I don't know about you, but I thought, have we not seen that like a million times? Is that not beyond cliché, like way past the cliché at this point? It didn't sit with me. It didn't ring true for me, from my own life. Like my wife, my daughters, my mom was a single mom. I'm surrounded by women. They're all better than me. They're all 100% better than me, in every single way.

They're smarter. They're stronger. They're safer. They're healthier. I'm a hot mess, and they're like the rock. And if we're being honest with ourselves, women now are holding the world up, right? While men are shooting the world up, no one wants to say that out loud. Like, what? When's the last school shooter that was a woman? Well, there wasn't, right? So, this is what's happening. And for me, it was just honest. It was real. And it was like, what life really is, swapping the roles was the only choice to make it. There wasn't even a doubt.

MF: How lucky the women in your life are to have you appreciating them. That's so great.

MF: You got to work, of course, with Melissa McCarthy and Chris O'Dowd again after St. Vincent. So, what was it like reuniting with them on set?

Melfi: It was awesome. Chris and Melissa, they're like family, we have a comfortability, we have a shorthand. In a weird way, we kind of grew up together, more Melissa than Chris, because I haven't spent that much time with Chris outside of the two projects. But I spent a lot of time with Melissa outside of these projects, and we've all grown up together, and matured together and become this kind of working family together. Acting and making films is kind of like a gypsy carnival. You go from one thing to the next, to the next, to the next. And along the way, you collect these people that are like a family. So, having them on set was like having your cousin, and your brother, and your sister on set. The ones you actually talk to.

'The Starling' is now on Netlfix.