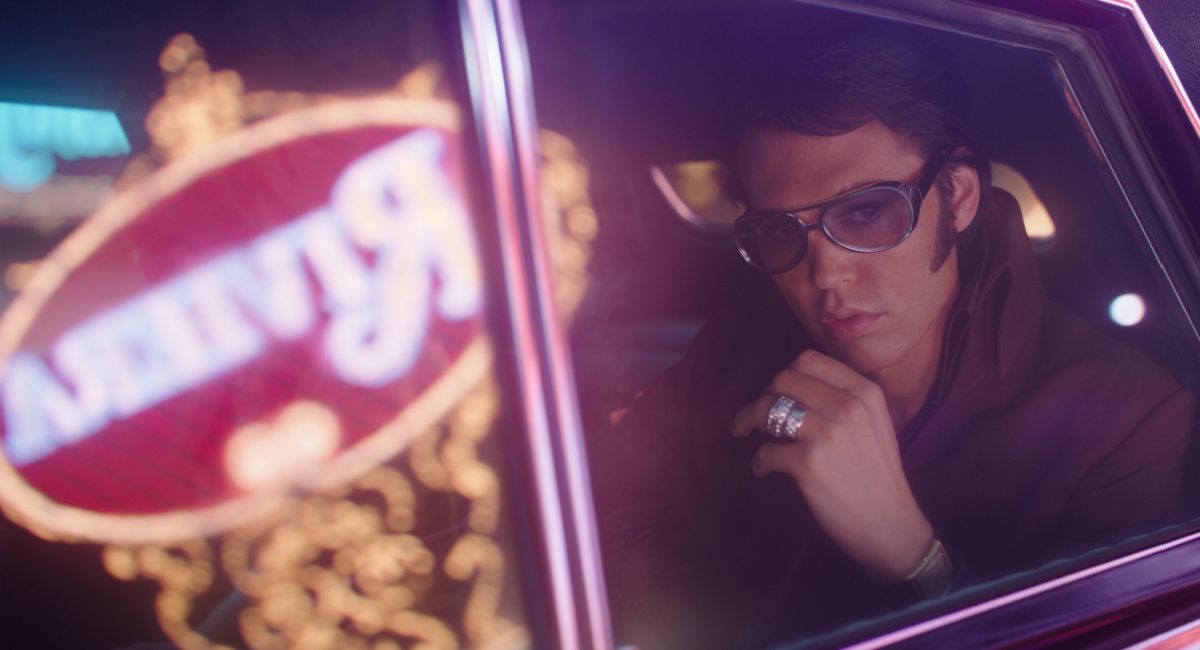 Opening in theaters on June 24th is ‘Elvis,’ the new musical biopic about the life and career of Elvis Presley, from ‘Moulin Rouge!’ director Baz Luhrmann.

The film stars Austin Butler (‘Once Upon a Time in Hollywood’) as the title character and chronicles his early days to his success as the world’s most famous musician and movie star, as well as his complex relationships with manager Colonel Tom Parker (Tom Hanks), and his wife Priscilla Presley (Olivia DeJonge).

The result is a true masterpiece of a movie, that is not without its faults, but thanks to the astounding Austin Butler, features one of the greatest performances I’ve ever seen on screen!

The film is narrated by Hanks’ Colonel Tom Parker, on his death bed as he recounts how he discovered Elvis Presley (Butler). The film then flashes back to the 1940’s when Elvis was a child discovering Gospel and Blues music, and eventually to how he and Parker first met in the early 50’s. Parker, a carnival conman at his core, instantly recognizes the cash cow that Presley will become and after impressing his parents, becomes Elvis’ new manager. The singer quickly becomes a sensation but is accused of deviant behavior because he wiggles his hips while he sings.

To change the course of his career, Parker orchestrates Elvis joining the Army, where he meets a young Priscilla (DeJonge) while overseas. After his stint in the Army, they quickly fall in love and marry, while Elvis returns to making movies. But Parker is unwilling to allow Elvis to stretch his acting chops, and eventually his films and music stop being popular after The Beatles invade America in the early 60’s. With an ever-changing entertainment landscape, and against the wishes of Parker, Presley begins to design his 1968 Comeback Special, that would put him back on top.

Wanting to go on an international tour, Parker, who is not really Tom Parker, has no actual passport and fears losing his star, tricks Elvis into taking a lengthy Las Vegas residency. With his increasing drug habit, carrying of loaded firearms, and an overall unhealthy lifestyle, Elvis finds his life and career at a crossroad in the mid-70’s as friction between him, Parker, and Priscilla, threaten his marriage, career, and ultimately his own life.

I cannot overstate enough how mind-blowingly incredible Austin Butler’s performance as Elvis Presley was. He literally is Elvis! I almost forgot entirely that I was watching an actor give a performance and not “The King“ himself. Butler’s performance transcends any small issues the movie might have, and absolutely makes the film worth watching. This is a career-making performance for Butler, not unlike Jennifer Hudson in ‘Dreamgirls.’

A few years ago, Rami Malek won an Academy Award for playing Freddy Mercury in ‘Bohemian Rhapsody,’ and he didn’t even sing his own songs, not to mention the film was mediocre at best. A year later Taron Egerton was snubbed for an Oscar nomination for his far superior performance as Elton John in ‘Rocketman,’ which is actually a very good movie where Egerton did sing his own songs.

I hope that Austin Butler is not forgotten about at the end of the year because if anyone deserves an Academy Award for a particular performance it's him for this one. Plus, Butler does sing all the music in the film and sounds exactly like Presley! If for some reason the Academy does not at least nominate Butler, then I recommend Malek do the right thing and just hand his Oscar over to him ASAP.

Director Baz Luhrmann was certainly the right director to bring this story to the big screen, and the direction, the production design, the music, the editing, the cinematography is all top notch. While Luhrmann may receive some criticism for mixing the soundtrack with music of the time and today’s hip hop, I thought it worked very well and gave the movie a contemporary feel.

I did question at first Luhrmann’s choice to use an unreliable narrator in Colonel Tom Parker, who tells the story really as if he was the star and not Elvis. It threw me at first and then I realized that this a person who had been taking credit for Elvis his whole life, so why should the biopic be any different? It actually works by the movie’s end.

I have to say, I wasn’t sure at first if I hated Tom Hanks’ performance, or if I just hated Tom Parker. I now realize that it was the later, and that is quite an accomplishment for the most likable man in Hollywood to pull off playing one of the most despicable human beings to ever live. I can’t say Hanks’ performance does much to humanize Parker, but then again, I’m not sure how much humanity was in the man to begin with.

However, the film is not without its faults, as it is a fairly sanitized version of Elvis’ life. Yes, the movie does touch on his codependent relationship with his mother, his drug use, his love for guns, and his womanizing, but none of those subjects are truly explored in a meaningful way. Even his relationship with Priscilla is shown in a different light than the truth, as the movie never makes mention of the fact that she was only 14-years-old when she started dating Elvis.

But the film does tackle one of Presley’s biggest criticisms, which is that he culturally appropriated his music. The movie’s answer to that criticism is that Elvis did not maliciously do this, he just grew up in an area where that music was popular and truly fell in love with Gospel and the Blues. It also depicts the reaction from that community at the time, which was not of anger, but of pride that their music was finally being heard by the entire world, regardless of who was singing it. That may or may not be accurate, but kudos to the filmmakers for not ignoring that controversy.

The core of the movie really focuses on the relationship between Elvis and Parker, which was an interesting choice, but I guess I just feel like Parker doesn’t deserve that much credit. It would have been nice to focus a little more on Elvis, his relationship with Priscilla, and his eventual downfall.

While her part is somewhat small, Olivia DeJonge is absolutely lovely as Priscilla and you really feel how genuinely she loves Elvis, and how painful it was for her to watch his ultimate spiral out of control. The movie is also filled with excellent supporting performances from Kelvin Harrison Jr., Alton Mason, and Yola Quartey as legendary musicians B.B. King, Little Richard, and Sister Rosetta Tharpe, respectively.

But in the end, this movie really belongs to Austin Butler and his truly amazing performance as Elvis Presley. The movie, the music, and Butler’s performance will make you fall in love with Presley all over again and is a fitting tribute to “The King.”