The ‘Fantastic Beasts’ Franchise Struggles to the Finish line with ‘The Secrets of Dumbledore,’ which is a Satisfactory Conclusion to an Uneven Spinoff Series

Jude Law and Mads Mikkelsen bring strength and humanity to their characters, but while the final chapter of this story is more entertaining than the previous installments, it’s not enough to recapture the magic of the ‘Harry Potter’ series. 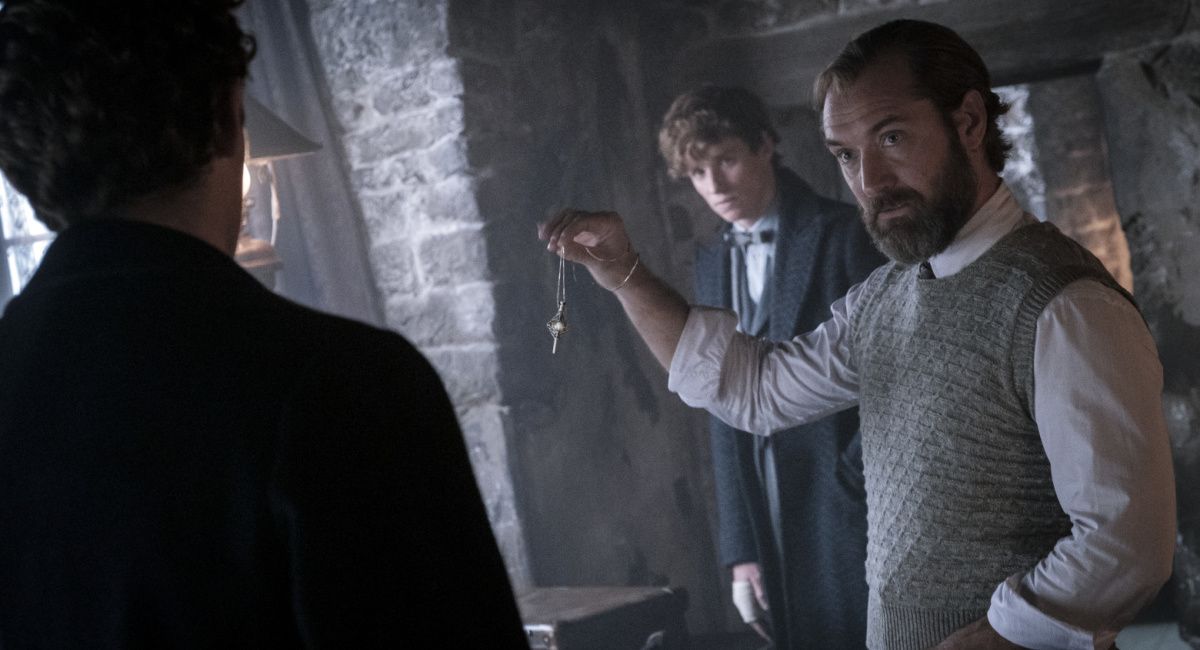 Once again directed by David Yates, the movie follows Newt Scamander (Eddie Redmayne) and his friends as they aid Albus Dumbledore (Jude Law) in stopping his former lover, Gellert Grindelwald (Mads Mikkelsen) from taking over both the Wizarding World and the world of Muggles.

The result is an entertaining conclusion to an otherwise pointless spinoff series that never quite recaptures the magic of the ‘Harry Potter’ films but does feature strong performances from Jude Law, Mads Mikkelsen, Dan Fogler, and Alison Sudol.

The movie begins in 1932, where Newt Scamander (Redmayne) is helping a Qilin give birth, which is a magical creature with precognitive abilities. Credence Barebone (Ezra Miller) soon arrives and kidnaps the newborn so the evil Gellert Grindelwald (Mikkelsen) can use it in his plan to take over both the Wizarding and Muggle worlds. Unbeknownst to Grindelwald, the Qilin had twins, and now Newt must keep the sibling’s existence a secret.

Unable to stop Grindelwald himself due to a blood oath the two men took with each other when they were younger, Dumbledore recruits Newt, his brother Theseus (Callum Turner), Eulalie "Lally" Hicks (Jessica Williams), Yusuf Kama (William Nadylam), and Jacob Kowalski (Fogler) to stop Grindelwald's plan for world domination. Since Grindelwald can now see into the future, thanks to the Qilin, Dumbledore enacts a complicated procedure where his friends only know their roles and not the overall plan.

Grindelwald is soon acquitted of his crimes by the German Ministry of Magic and announces that he is running for the office of Supreme Mugwump. Grindelwald dispatches Barebone to kill Dumbledore and it is soon revealed that he is the lost son of Albus’ brother, Aberforth (Richard Coyle). Now, Dumbledore must hope that his plan works, and that Newt can protect the surviving Qilin long enough to prove Grindelwald is a criminal before he is elected Supreme Mugwump and takes over both the Wizarding and Muggle worlds.

The biggest problem with ‘Fantastic Beasts: The Secrets of Dumbledore’ is that it is the third installment of a series that I have lost interest in after two films. Yes, it’s a spinoff to a franchise that is beloved, but any DNA it shares with the ‘Harry Potter’ films is somewhat surface level at best. So, it was difficult to follow along with the complicated plot because I had forgotten a lot of the characters and subplots from the previous installments.

The ‘Fantastic Beasts’ series really only started to get good with the inclusion of Jude Law as Albus Dumbledore in ‘Fantastic Beasts: The Crimes of Grindelwald,’ and is at its best when it doubles down on familiar ‘Potter’ characters and locations such as Dumbledore or Hogwarts.

But placing Dumbledore’s relationship with Grindelwald at the center of story was a very wise choice. The film begins with a quiet scene in a restaurant between Law and Mikkelsen’s two characters that is reminiscent of the scene between Al Pacino and Robert De Niro in ‘Heat.’ Dumbledore and Grindelwald are clearly at odds with each other, on separate ends of a long Wizarding World conflict, but also have a very strong and loving friendship that is at the heart of the film.

Albus once loved Gellert, and is upset by what he’s become, and what he will ultimately have to do to stop him. The idea that these two enemies cannot fight each other because they once loved each other is a very fascinating aspect to explore, which the film does well and deserves credit for including with such respect.

Jude Law gives an excellent performance, giving all the commanding gravitas you would expect from the character, while also adding a rare vulnerability that we have not seen in past appearances. Richard Harris and Michael Gambon both played Dumbledore as a wise mentor to Harry Potter, but Law’s performance gives a look at him as a younger man, making the difficult choices that would lead him to be the character that guides Harry in the later movies.

Replacing Johnny Depp, who played Grindelwald in the previous film, Mads Mikkelsen doesn’t miss a beat and has wonderful chemistry in his few scenes with Law. Through his performance, you understand what Albus once saw in him, the moments of greatness that have been taken over by his own ambition and rage. While Mikkelsen definitely plays the character as the “villain,” he shows shades of the man Albus fell in love with, which adds to the conflict of the film.

One storyline I do remember from the previous movies that is concluded in ‘The Secrets of Dumbledore,’ is the relationship between Jacob (Dan Fogler) and Queenie (Alison Sudol). If Albus and Gellert’s relationship is central to this film, Jacob and Queenie’s story is central to the overall series. Jacob is the audience’s surrogate, the Muggle who fell in love with a witch that sided with Grindelwald at the conclusion of the last film. Their relationship, watching Jacob fight for her love, and the two actors’ excellent performances are what make Jacob and Queenie two of the best characters in any of the ‘Fantastic Beasts’ movies.

The weak links for me in this film were surprisingly two of the biggest names in the movie, Ezra Miller and Eddie Redmayne, who are both usually very good actors. Miller scowls his way through the film playing Credence Barebone, a character we should have sympathy for but instead is just played like your average villain. Even when his true parentage is revealed, you feel no real connection to the character or his actions.

Redmayne, meanwhile, does his best in the role, but is often overshadowed by Law, Mikkelsen, Fogler and other members of the cast. I appreciate the actor’s take on the character, playing him as a nervous oddball, but the performance can be distracting at times, taking us away from the main points of the plot.

Ultimately, the character of Newt Scamander was just not interesting enough to lead his own series, as he is no Harry Potter! That’s probably why the series quickly pivoted from focusing on Newt to becoming more of an Albus Dumbledore origin story. “Dumbledore Begins,” if you will.

In the end, ‘Fantastic Beasts: The Secrets of Dumbledore’ delivers a satisfying ending to an otherwise rocky series that may appease some ‘Harry Potter’ fans but fails to recapture the magic of the original franchise.

‘Fantastic Beasts: The Secrets of Dumbledore’ received 3 out of 5 stars.

Fantastic Beasts: The Secrets of Dumbledore

Why Universal Studios is Even More Magical at Christmas

The Wizarding World of Harry Potter Opening Hollywood Location in 2016