The performance is a breakthrough for Smith, playing a well-intended but flawed character, and he does it with all the charm and charisma we expect from the “Artist formerly known as the Fresh Prince.” 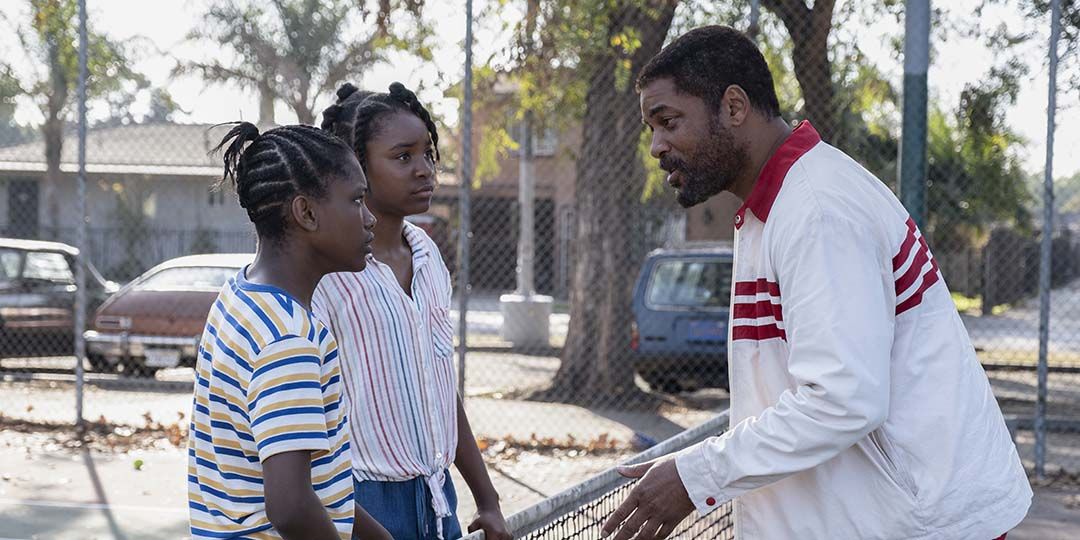 (L to R) Demi Singleton as Serena Williams, Saniyya Sidney as Venus Williams and Will Smith as Richard Williams in 'King Richard'

Opening in theaters on November 19th is the new biopic ‘King Richard,’ which chronicles the life of Richard Williams, father of tennis legends Venus and Serena. The film stars Oscar-nominee Will Smith in the title role and follows his character’s journey to make his two youngest daughters the greatest tennis players of all-time. Directed by Reinaldo Marcus Green (‘Monsters and Men’), the movie also features Jon Bernthal (‘The Punisher’), Tony Goldwyn (‘Scandal’), Dylan McDermott (‘Olympus Has Fallen’), Aunjanue Ellis (‘The Help’), and Saniyya Sidney (‘Hidden Figures’) and Demi Singleton (‘Godfather of Harlem’) as Venus and Serena, respectively. The result is an inspiring feel-good movie with an Oscar-level performance from Smith, and excellent supporting turns from Ellis, Sidney and Singleton.

The film begins in Los Angeles in the early 1990s and shows Richard Williams (Smith) hustling to get tennis balls to practice with for his two youngest girls, Venus (Sidney) and Serena (Singleton), who he believes are preordained to be the greatest tennis players of all-time. Living in Compton and working several jobs to make ends meet, Richard and his wife Oracene (Ellis) have a strict plan to take their girls to the top of the tennis world, which up to this point has been dominated by white, upper-class players. Practicing on dangerous community park courts at night will only take the girls so far, and the Williams realize that in order to go the distance, the girls will need professional training.

After rejections from some of the best coaches in the game, who simply dismiss Venus and Serena based on their skin color and financial situation, Richard refuses to give up and eventually convinces Wimbledon champion John McEnroe’s coach, Paul Cohen (Goldwyn), to train the girls. He realizes right away how special they are but can only take one of them on as his student and chooses Venus because she is older. Cohen takes Venus on the junior circuit, where she dominates, but he bumps heads with Richard when he decides Venus will not compete again until she goes pro. Eventually, Richard convinces legendary Tennis coach Rick Massi (Bernthal) to take Venus under his wing, and the Williams family moves to Florida, so she can train full time. Meanwhile, felling left-out but still supporting her sister, Serena begins training with her mother, who “fixes” her serve.

The drama escalates as both Venus and Rick try to convince Richard that she is ready to go pro. On the verge of her first big professional win, Nike offers her a 3-million-dollar contract, which she declines, wanting the world to see how good she is before she takes the money, which does end up working to her advantage in the end. But, on the eve of Venus becoming the #1 ranked tennis player in the world, Serena is feeling left-out again, when her father finally lets her in on his ultimate plan. He tells her that while he always knew Venus would “open the door,” he believes that someday Serena will become the greatest to ever play the game, which of course, is exactly what happened.

While I loved the movie, and found it to be both touching and inspirational, I have to get one thing off my chest first. The concept that the two greatest tennis players in the history of the game would be supporting characters in their own story is problematic. While Richard is the lead character, I’m happy to say that Will Smith’s performance, as good as it is, does not over-shadow the importance of Venus and Serena’s own story. But it’s important to note that both Venus and Serena Williams are producers on the film and signed off on it, likely as a love letter to their late dad. That’s important because they clearly wanted this story told, putting the focus on their father’s sacrifices for their success, rather than their own personal triumphs.

On that level the film definitely works, but it also does not shy away from showing Richard warts and all, as the character can be insensitive and overbearing at times, and as the film demonstrates, also had several other children from other relationships that he tried to hide from Oracene and the rest of his family. Richard Williams was not a perfect person, and I appreciate that the filmmakers and Smith included that, rather than depicting him as a saint. But what is clear from the film and Smith’s performance is how much Richard loved and believed in his girls, even when no one else would, and how he fought tirelessly for their chance at success.

Will Smith has previously been nominated twice for Best Actor Academy Awards. First for 2002’s ‘Ali,’ for which I think he should have won, and secondly for 2007’s ‘The Pursuit of Happiness.’ Will Smith will receive an Oscar nomination for his performance in ‘King Richard,’ and in a fairly weak year for leading men, he likely will win, both because his performance is a career achievement, and also for the overall body of his work. And don’t think that love for the Williams sisters and their achievements won’t also play a part in his ultimately winning the award, if that does come to pass. The performance is a breakthrough for Smith, playing a well-intended but flawed character, and he does it with all the charm and charisma we expect from the “Artist formerly known as the Fresh Prince.”

I also want to mention Jon Bernthal and Tony Goldwyn, who are both great and give really fun performances as Venus and Serena’s coaches, Rick Massi and Paul Cohen, respectively. But please don’t overlook the truly fantastic supporting performances from the female members of the cast, especially Aunjanue Ellis, Saniyya Sidney and Demi Singleton. As Richard’s wife, Oracene, Ellis is brilliant and completely holds her own against Smith. In fact, the veteran actress got some of the biggest reactions in the movie from the audience at the screening I attended and will likely earn herself a Best Supporting nomination as well.

But as good as Smith and Ellis are, the film simply would not work if the actresses playing Venus and Serena were not completely believable, both as well-known characters and tennis players. Sidney and Singleton are both equally wonderful in their roles and bring their characters completely alive in a very vulnerable way, which could have been a real challenge for the young actresses seeing how famous the characters they are playing are. While I would love to have seen more of their characters’ points of view in the film, I understand that the focus was on Richard, and Sidney and Singleton’s performances compliment Smith’s.

Directed by Reinaldo Marcus Green (‘Monsters and Men’), the film is not perfect, and ended on a bit of a down note for essentially a sports film. However, since we know about the real-life success both Venus and Serena will go on to achieve in the sport, I understand why the movie concluded as it did. In the end, ‘King Richard’ isn’t about tennis, and in a way it’s not even about the Williams sisters, it’s about a man’s resilience and his commitment to his family and their dreams. With an inspiring story, and powerhouse performances by Smith and the rest of the cast, ‘King Richard’ is truly a feel-good movie that will resonate with audiences over the holiday season and may even produce some Oscar nominations during award season too.