She-Hulk goes full courtroom drama with a spice of magic and a fun action sequence, but never loses the humor it excels at. 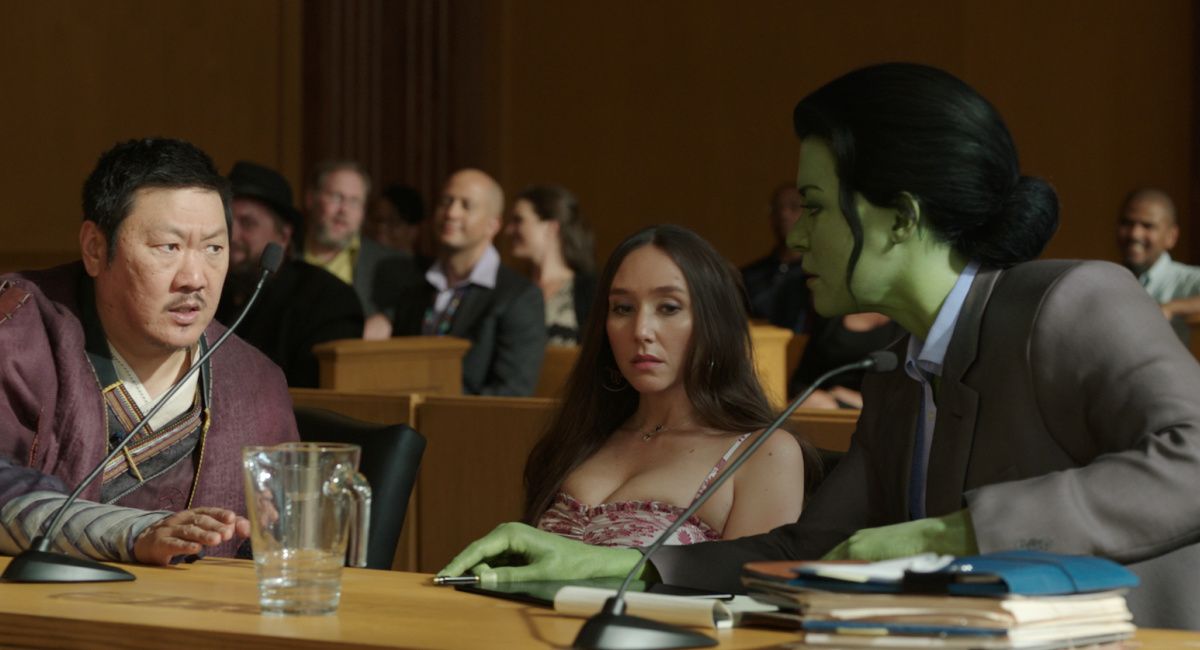 While last week's episode ended with some criminals in the night, this episode seems to be going more towards the mystical side. Welcome to episode 4 of ‘She-Hulk: Attorney at Law,’ “Is This Not Real Magic?” Which features our best friend Wong (Benedict Wong)!

The episode opens with a mansion outside of town and a hack magician performing. The crowd looks bored, as he calls a volunteer up on stage. Still looking over the unenthused crowd, Donny Blaze (Rhys Coiro) pulls out a “sling ring” and makes a portal.

We cut to Nepal and Wong. The portal opens above him and the volunteer drops in. She tells Wong that the portal dropped her into a pit with a talking goat and then she ended up there. He offers to send her home but not before she unceremoniously spoils ‘The Sopranos’ episode he was watching.

Cut to Jennifer (Tatiana Maslany) breaking the fourth wall again, mentioning that we look happy because we saw Wong. “It’s like giving the show twitter armor for a week,” she says. Her dad (Mark Linn-Baker) comes in and offers to boost up her security after her attack.

She says she’s a Hulk and will be okay. We move to her office where Jennifer is setting up her new dating profile. Nikki (Ginger Gonzaga) comes in to show her another interview she did, and they are stopped by Wong. He explains his “issues” with the magician from earlier.

Wong explains that Blaze was kicked out of the Mystical arts school and now he is using his magic for dangerous purposes. Jennifer asks if Blaze signed a contract, and Wong explains that they never got it in writing.

She mentions doing things by the book, and Wong asks, “The book of Ashanti?” No, the book of American laws! He gives her his card and leaves. At the bar, Jennifer closes the laptop on the cease and desist, and has some last minute Blonsky (Tim Roth) paperwork to do.

A man approaches them, offering to buy her a drink. Jennifer mentions they are doing work and he walks away. She says that type of guy is the reason she doesn’t date. Nikki asks to see her profile, immediately calling her out for her choices, starting to swipe on her matches.

She brings up dating as She-Hulk. Jennifer says no, and that it’s possible for her to get dates as her normal self. We jump to She-Hulk and Wong handing the cease and desist over to Blaze and his manager, Willows (Leon Lamar). Blaze argues with the sorcerer supreme about who’s the better magician and she puts a stop to it, being very obviously grossed out by him and leaving the office.

Next, Jennifer is on a date! However, her date (Ryan Powers) is not exactly blowing her away. He mentions that he was an entrepreneur and not subtly looks at other women. He asks what Jennifer does and she mentions she’s a lawyer.

In the courtroom, we see the case between Wong and Blaze. The judge is dubious at best. Wong summons the woman from the magician’s show, Madisynn (Patty Guggenheim) and She-Hulk uses her as the best witness they have.

Well, it’s not working at all. She’s absolutely the worst witness of all time! Blaze’s lawyer asks for the charges to be dismissed, and She-Hulk points out that the mystic arts is real magic, unlike what he does. “Oh my god even the lawyer is a magician,” Jen says.

Wong stands and gives a speech on how Blaze could easily destroy all life as they know it, and the judge explains that it will take a few weeks for her decision and Blaze is still able to do magic in the meantime. Wong offers to throw him into the mirror dimension, but She-Hulk tells him not to.

Jennifer asks Nikki to look at the case for her, and she gets no new matches on her dating app. Finally, out of desperation, she makes an account for She-Hulk. “I’m not proud of this,” she tells the audience. And within seconds, she’s getting matches.

She goes on a date with a few matches, but even then, none of them are great. They still treat her weirdly both as a woman and as a superhero. She asks, “Is there anything worse then dating in your thirties?”

Finally, she meets a man that just seems perfect, Arthur (Michael Curiel), who asks more about her and wants to split some food to go.

Meanwhile, Blaze is back on stage and his volunteer isn’t exactly going along with his act. He summons a real bird that lays an egg, but it hatches a baby demon monster. Throwing it into a portal, he accidentally summons more of them. He then teleports into Wong’s house and asks for his help stopping the demons.

Back at her home, Jennifer is absolutely loving this guy. But before anything could happen, Wong interrupts, asking why she isn’t answering her phone. “Oh, I know why,” says Wong, as she tells Arthur she’ll be right back.

He tells her about Blaze’s portal and She asks Wong what she’s supposed to be doing there. “Be a Hulk,” he tells her and she helps him send the demons back. Mentioning how of course she finally found a hot guy who cares about her and now she’s fighting demons instead of being with him.

After sending them back, she forces Blaze to except the cease and desist order. He agrees and Wong sends Jen back to have a fantastic night. She wakes up the next morning to Nikki informing her that Titania (Jameel Jamil) is on the news again, as the villainess has now been cleared of all charges.

Arthur walks in and is surprised she’s Jennifer and not She-Hulk. He doesn’t look happy, and awkwardly leaves. Jen answers the door to a man serving her a cease and desist, claiming that the Titania trademarked the name “She-Hulk.” “What a bummer way to end the episode, hopefully there’s a fun tag,” Jen tells the audience as the episode ends.

While there was a tag, I think the fun thing to discuss is how 'She-Hulk' has been using its humor to poke fun at the MCU.

Very obviously, Donny Blaze is a play on Johnny Blaze, the character known as Ghost Rider. The actual She-Hulk comics themselves were filled with Marvel references and as we mentioned last week, the fourth wall breaks. Honestly, it’s like the show is highlighting the characters Marvel has recently had returned to them, from Wolverine to now Ghost Rider, and as we know from the trailer, eventually Daredevil.

But with that fun and action filled episode concluded, we’ll see you back next week in hopes the action and humor continues to impress!