In addition to the return of Titania, we also get a hint at a fan favorite character whose been gone for way too long. 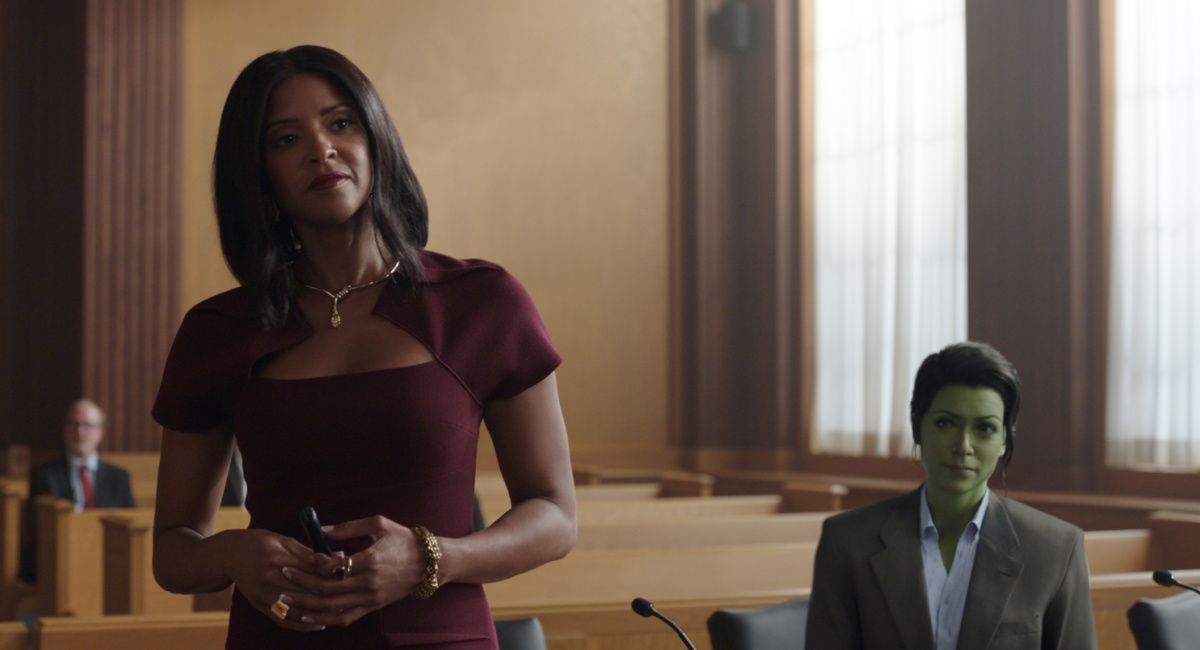 We begin by seeing a commercial from Titania (Jameela Jamil), who is using the name “She-Hulk” for her new makeup line, which claims to help bring out the “inner beauty” of people. It’s everywhere; a billboard, commercials, even a pop up. We cut to Jennifer’s (Tatiana Maslany) apartment where her cousin Ched (Nicholas Cirillo) breaks in and asks her to sign boxes of the makeup.

He mentions that not trademarking her name was dumb and explains to her how the law works. Jennifer yells into a pillow in anger. Jennifer and Nikki (Ginger Gonzaga) go to the pop-up, in hopes of confronting Titania. But she just makes fun of Jen, and the lawyers are unable to do anything there.

Back at the office, Jennifer says, “I’m still Jennifer Walters, She-Hulk is just something that happened to me,” and starts naming all the good aspects of being a Hulk. Nikki points out how she’s showing a bit of anger by crushing office equipment.

Nikki is approached by Pug (Josh Segarra) and asked to sit with him on a sneaker drop, for a pair called the “Iron Man 3's.” She pokes fun at him for collecting shoes that he isn’t going to wear. He mentions a man named Alonzo who can get anything fashion wise, and Nikki asks if he could find clothes for a “superhuman sized person.”

Jennifer is watching Titania thank her fans. “I’m over it. I really am,” she tells the audience.

Nikki and Pug go to where Alonzo sends them, which is a Boba café, not a clothing store. The man who works there goes into the back and invites them in, but it’s really all bootleg Avengers merch. After demanding to see the real superhero designer, Luke Jacobson (Griffin Matthews), they are questioned, and they lie, saying that Titania sent them.

That doesn’t work, and they lie once again and say that the clothes are for an Avenger. Jacobson even calls them out via the camera at his office for being huge dorks and dancing after he agrees to the appointment.

Jennifer is sitting with her boss (Steve Coulter), who asks about the billboards around town with She-Hulk on them. He says that she is the face of their business, and this could destroy everything. He assigns her an attorney, Mallory Book (Renée Elise Goldsberry) and she isn’t exactly happy doing it.

She-Hulk mentions that no other superhero had to trademark their name. Mallory assigns Nikki to help change her look, saying that Jennifer’s current clothing make her look like a football player.

We cut to court, and Book works her butt off to put the judge on their side, providing a killer argument to why Titania messed up in trademarking the name. But Titania’s lawyer pulls out footage of Jennifer saying that she doesn’t like the name, yet Book comes back with more footage, going blow for blow.

The judge agrees to break for a few days, and Nikki takes Jennifer to meet with the clothing designer. She talks Jacobson into helping them, and he asks what superhero thing she does. He explains he makes combat suits, and she tells him that she’s just a lawyer.

Nikki says she needs the suit to fit both Jennifer’s She-Hulk body and her human body, and he agrees to make her something. They go back to the office, and she spots the guy she went on a date with in the last episode who had the “superhero fetish.”

He claims to be a client and asks to reconnect with her, Jennifer very much not wanting that. Jennifer and Nikki discuss the dates she had while being She-Hulk, and she realizes that using the men she went on a date with would help her in court.

Book comes to court with her dating profile, showing how she used She-Hulk to get herself a date. But her dates really help, explaining how she was She-Hulk to them, including Derek (David Otunga) who left her that morning, even admitting he would have never dated Jennifer to begin with.

The judge sides with Jennifer, basically halting Titania’s huge product line. As they walk out, Jennifer jokes that she needs to schedule therapy. But Book stops her, mentioning how Derek looked at her weird after he explained not liking her as a normal human. “You can do better,” Mallory tells her.

Jennifer invites her to drinks as a thank you, and Book jokes how she’s never seen a lawyer embarrass herself in court like that to win a case. Jen laughs about how their friends now and is baffled that she said it out loud. Mallory mentions her clothes before leaving.

She-Hulk goes to see her new suits, and Jacobson pulls out “something extra” for her. He goes to pick up an open box, yelling about client confidentiality. In it, is a gold Daredevil helmet. Episode ends.

Now a lot of people who followed the Netflix ‘Daredevil’ series obviously know why seeing the iconic helmet is so important. It’s been a few years since the streaming service unveiled the beginning of its own Marvel Universe, introducing us to ‘Iron Fist,’ ‘Luke Cage,’ ‘Jessica Jones’ and ‘Daredevil.’

Charlie Cox solidified his role in the dark, gritty and violent series, and his seemingly never-ending fight with Vincent D’Onofrio’s Kingpin became one of the most iconic hero versus villain stories that Marvel had put on screen to that point.

(L to R) Charlie Cox as Daredevil and Vincent D'Onofrio as Kingpin on Netflix/Marvel's 'Daredevil.'

When Disney took back the rights to the franchise and the show was removed from Netflix, fans were worried we’d never get to relive the stories told on the platform. But just this year, Disney+ raised the bar for streaming and released every Netflix MCU show in one day, showing fans they did indeed care for the darker, more grittier series.

With Cox returning to the Matt Murdock role he popularized on Netflix in “She-Hulk”, a new generation of fans who never witnessed the time Marvel paired up with Netflix can appreciate honestly what is one of the best casting decisions made in the universe so far. Plus, we’re getting Cox and D’Onofrio back in the recently announced ‘Daredevil: Born Again.’ Starting production next year.

With the fantastic reveal at the end of this episode, we can only imagine what’s coming next week. Hopefully I’ll see you all there!