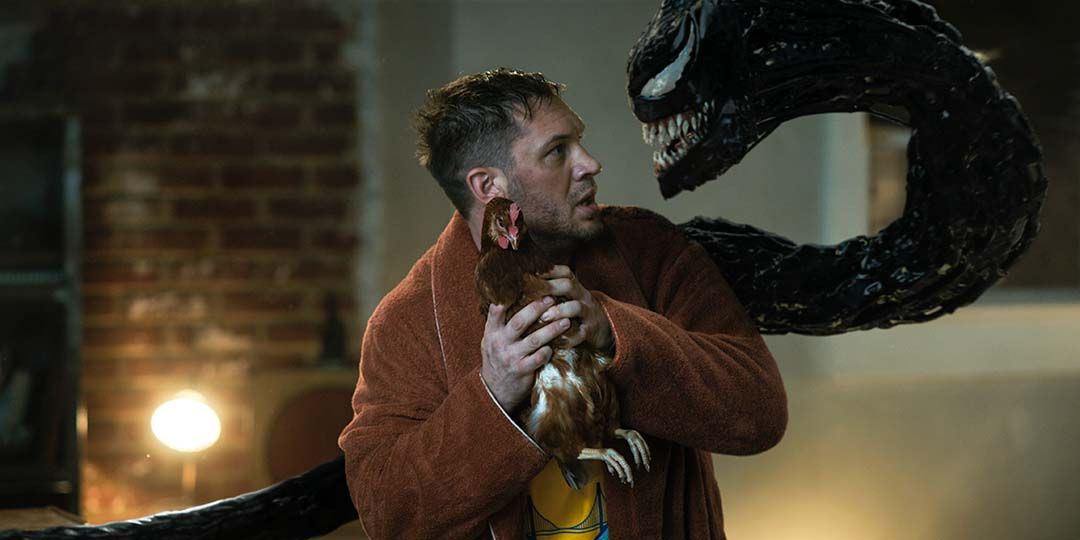 Tom Hardy in 'Venom: Let There Be Carnage'

In the previous film, directed by Ruben Fleischer, investigative journalist Eddie Brock thwarts a deadly experiment by unhinged scientist Carlton Drake (Riz Ahmed), while becoming entangled with the titular symbiote and losing his fiancé Anne (Michelle Williams). In a post-credits sequence, we’re introduced to serial killer Cletus Kasady (Woody Harrelson), whose one request is to tell his story to Brock.

The latest entry in the franchise, in which Hardy not only plays the dual roles of Venom and Brock, but he also produced and has a story by credit, picks up right where we left off. Brock is still a bit of a loser, living in a beat up apartment in San Francisco’s Tenderloin neighborhood. Only now he’s forged a deep relationship with his symbiote Venom. They squabble like any couple - and even have a pair of chickens as pets, because you simply cannot separate Sonny and Cher.

Woody Harrelson as Cletus Kasady in 'Venom: Let There Be Carnage'

But, this is still a comic book action film! Finally visiting Cletus in prison, Venom uses his super alien intellect to help Eddie make a break in Cletus’ case, sending him directly to death row. In a flashback at the start of the film, we learn that Cletus was a troubled kid, whose only love Frances Barrison aka Shriek (Naomie Harris) was violently removed from him. Everything he’s done since is to try to find her again. Harris and Harrleson have such chemistry in their scenes together, even just as they share passionate glances. They make you believe they are all they have in the world, a latter-day Bonnie and Clyde.

After receiving a cryptic postcard from Cletus, a guilt-ridden Eddie visits him on death row. As Cletus insults Eddie, Venom’s protective nature takes over and in the ensuing fight Cletus bites them. Thus, Carnage is born - a symbiote birthed from violence, who grafts on to a heartbroken serial killer. You know things are going to get messy messy messy.

The action set pieces are a bit muddled and hazy, like most films that rely heavily on CGI. That said, it is fun to watch Carnage wreak havoc everywhere he goes, growing into a larger and larger phalanx of red flesh after each bout of destruction. At first Harrleson’s Cletus effortlessly accepts the chaos, but as it becomes clear that what Carnage wants is at odds with his relationship with Shriek, the actor imbues the killer with impassioned sorrow and rage.

The one action sequence that truly worked also leans into the film’s strongest asset: Hardy’s bonkers take on Venom and Eddie’s tempestuous relationship. After yet another petty quarrel, Venom has had enough and asks Eddie to leave their apartment, throwing his stuff out the window like a clichéd beleaguered wife would a cheating husband’s. It’s on the nose fan service, but it works, much like the previous film’s iconic lobster scene, because of Hardy’s absolute commitment to the bit and the emotional weight with which he performs these two characters.

A later scene in which a now-free Venom finds solace and support at an EDM concert, only to end up wishing Eddie could be there with him got me right in the feels. Venom and Eddie are a perfect match. The film allows us to witness the growing pains of them realizing their love, and that’s just beautiful.

Director Andy Serkis and Tom Hardy on the set of 'Venom: Let There Be Carnage'

Director Andy Serkis also finds time to flesh out supporting characters from the first film. Mrs. Chen (Peggy Lu), whose bodega Eddie and Venom frequent, has several wonderful scenes, including a particularly tender post-breakup moment with Venom. Anne’s new boyfriend, now fiancé, Dan no longer feels like a stock character. Given time to breathe, their relationship now feels real, their love as pronounced as Eddie and Venom’s. Lastly, Detective Mulligan (an always stellar Stephen Graham, in an exquisitely terrible wig) serves as a bridge between the two storylines.

At its core, ‘Venom: Let There Be Carnage’ is a film about the power of relationships, of finding strength in deep connections, and the dangers of misalignment. Expertly fusing comedy, romance, action, and violence, Serkis and Hardy have crafted a perfectly thrilling, thoroughly queer comic book extravaganza. Best date night movie of the year, hands down.

'Venom: Let There Be Carnage' opens nationwide on October 1.