TCA: What We Know About 'Unbreakable Kimmy Schmidt' Season 2 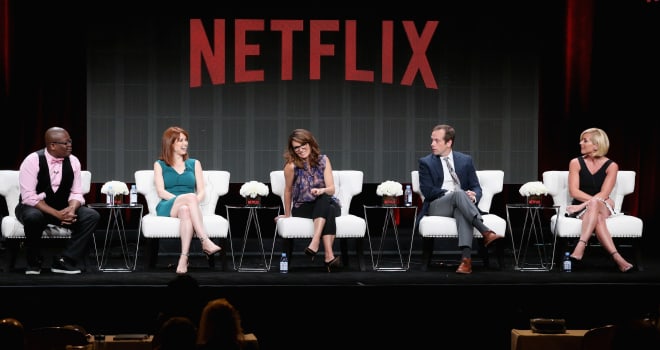 "Kimmy" was famously saved by Netflix after NBC decided to pass on the project, but not before filming its entire 13-episode first season. Thanks to network mandates, the show was pretty PG, and that's not going to change much for season two, either.

"I don't think you'll hear profanity or see nudity, but it gives us a license to play with time and structure without worrying about potentially offending an advertiser," co-creator Tina Feyexplained of the differences between making the show for a traditional network versus for a streaming service like Netflix. That also means that future episodes of "Kimmy" will likely be longer than the standard 21 minutes and 15 seconds of airtime that network sitcoms get, though no installments will run past 30 minutes.

"We want to be our own guides and not let ourselves get slow," Fey said.

That's good news, since "Kimmy"'s madcap, zany tone was one of the highlights of the series. Also a highlight was the sweet-as-pie Kimmy herself (played by the adorable Ellie Kemper, who was robbed of an Emmy nomination), whose plucky disposition won't be changing anytime soon.

"One of the fun challenges of the show is not letting Kimmy stop being Kimmy," co-creator Robert Carlock said at the panel. "She has to keep that strength and optimism."

Those traits will come in handy, since Kimmy -- who also may see the return of her love interest, Dong (Ki Hong Lee), according to Fey -- is going to have more challenges ahead in season two.

"New obstacles may present themselves before Kimmy can go on and live a fully realized life," Fey said. "She's in a big hurry to get everything she wanted out of the missing years of her life and hitting some speed bumps along the way."

We can't wait. Season two of "Unbreakable Kimmy Schmidt" is due to hit Netflix sometime next year.

Kimmy's Mom Is Coming to Season 2 of 'Unbreakable Kimmy Schmidt'

Watch an exclusive clip from 'Save Yourselves!'