The new poster for the upcoming third installment of the MCU’s Spider-Man franchise gives fans their first look at the film’s Green Goblin and plants hidden Easter eggs for other members of the Sinister Six.

Spider-Man fans already had a lot of expectations for the upcoming 'Spider-Man: No Way Home,' and thanks to the first official poster for the movie, which earlier this week, they now expect to see the Green Goblin return as well!

The new movie will deal with the aftermath of Peter’s secret identity going public at the end of 'Spider-Man: Far from Home,' thanks to Mysterio, and having Doctor Strange cast a spell so the world forgets who Spider-Man really is. However, we know from the recent trailer that things will go terribly wrong and tear a rift in the multiverse, allowing villains from the Sam Raimi and Marc Webb movies to also appear.

Conformation of this was given at the beginning of production when it was announced that Jamie Foxx would be reprising his role as Electro from 'The Amazing Spider-Man 2.' Then, earlier this year, actor Alfred Molina himself confirmed in an interview with Variety that he would also be reprising his role as Doctor Octopus from 'Spider-Man 2.' This led to countless rumors about the film, including that Tobey Maguire and Andrew Garfield may also return, playing their respective versions of Peter Parker.

Then, just last week, news hit that Empire Magazine was running an article on the film in their December issue that confirmed Rhys Ifans and Thomas Haden Church returning in 'No Way Home' as the Lizard and the Sandman, their characters from 'The Amazing Spider-Man' and 'Spider-Man 3,' respectively. Not to mention, and Spoiler Alert for 'Venom: Let There Be Carnage,' but Tom Hardy’s title character is also now running around in the MCU. Which leaves the Green Goblin, whose pumpkin bombs could be seen in the trailer, but who’s image has been kept secret until now.

If you zoom into the background of the new poster, you can see a small image that looks to be the Willem Dafoe version of the character from Spider-Man. While the Green Goblin’s voice can be heard in the trailer, it is difficult to know if it is really Dafoe or not. Although the new poster would indicate that this version of Norman Osborne will appear in the movie, there still has been no official confirmation from Sony or Marvel that the Oscar-nominated actor will be reprising his role. Fans will also notice that the new poster teases the other three previously announced returning franchise villains, with Doc Ock’s metal tentacles, yellow lightning to represent Electro, and a sandstorm for the Sandman featuring prominent in the poster.

But like a mirage, many online fans think that they have spotted other potential villains hidden in the poster. If you look at the Green Goblin image, there are two pieces of debris on either side of him, and some fans think that those tiny images are of James Franco and Dane DeHaan’s Green Goblins from 'Spider-Man 3' and 'The Amazing Spider-Man 2,' respectively. When I zoomed in on the poster, it just looked like debris to me, and there is absolutely nothing indicating that Franco or DeHaan will be reprising their previous roles in the upcoming film.

But the online guessing game doesn’t stop there, as some people think that the debris in the background near the edge of Spider-Man’s right hand is the Vulture flying in the background. Some online have even said that the Lizard is hidden in the bottom right hand corner, and that Rhino’s horn can be seen just below Spider-Man’s knee, but I don’t buy that one as it just looks like a metal spike poking out of concrete. But the wildest online theory is that the metallic tentacle we see on the right hand side of the poster is not Alfred Molina’s character, but instead Kathryn Hahn’s Doctor Olivia Octavius from 'Spider-Man: Into the Spider-Verse,' which seems completely made-up if you ask me.

The poster was dropped on the film’s official Twitter account, which even encouraged fans to use their “Spidey Senses” to look for “details,” so they clearly want fans guessing. But I think with many fans trying to find out everything they can about the upcoming movie, they are beginning to see things that are just not there, which may be exactly what Disney wants. I can’t remember a time in the past when a simple poster for a movie has caused so much excitement and online debate. I only fear that fans now expect far too much from 'No Way Home,' and anything short of all three cinematic Spider-Man fighting off a multiverse version of the Sinister Six will leave hardcore viewers disappointed.

Now, assuming that Venom is not one of the Sinister Six, as he wasn’t in the comics, and also assuming that the Sinister Six is featured in the new movie at all, that still leaves one-member unknown. It likely won’t be Jared Leto’s Morbius, as his solo film is not set to release until January, but it could be Michael Keaton’s Vulture, who is also set to appear in Morbius. And let’s not forget Jake Gyllenhaal’s Mysterio, although he apparently died in 'Far From Home,' the character is best known for his illusions, so anything is possible.

Vulture, or possibly Mysterio, would make the most sense to me to actually be the sixth member of the Sinister Six, if they do in fact appear. But if Green Goblin, Doc Ock, Sandman, Lizard, and Electro are in the movie, that would represent one villain from every non-MCU Spider-Man movie, and I would think that Marvel Studios would want at least one of Tom Holland’s Spider-Man villains from the MCU to appear as well.

With Benedict Cumberbatch and Benedict Wong already confirmed to reprise their Doctor Strange roles in 'No Way Home,' as well as Oscar winner J.K. Simmons returning as J. Jonah Jameson, the cast is already packed with other MCU characters. So, with the exception of Molina’s Doc Ock, and maybe the Green Goblin, I wouldn’t expect any of the villains from previous Spider-Man movies to have terribly large roles, as they will most likely appear as cameos towards the end of the movie, which is rumored to run well over two and a half hours.

Check out the new poster below, and 'Spider-Man: No Way Home' is set to open in theaters on December 17th. 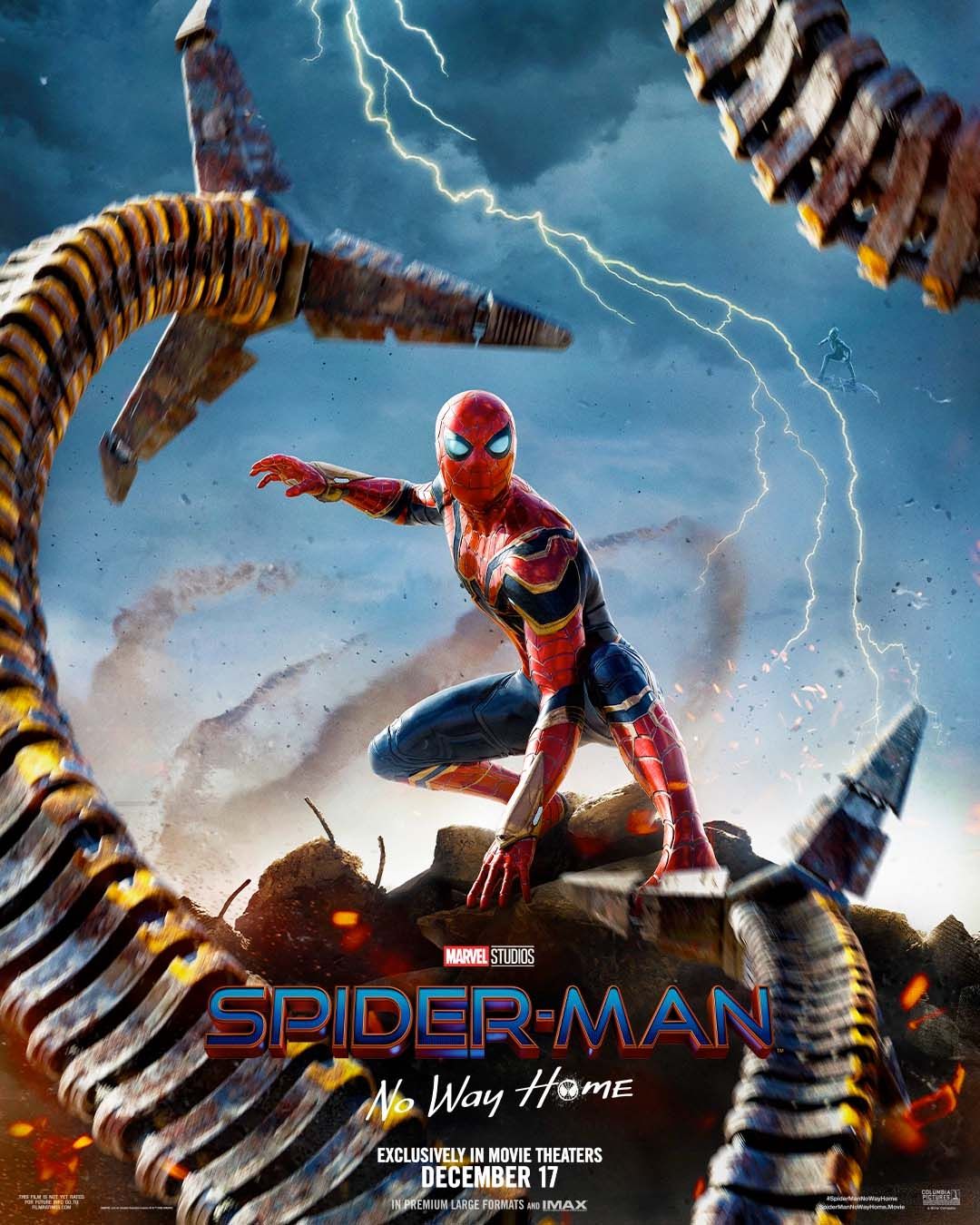