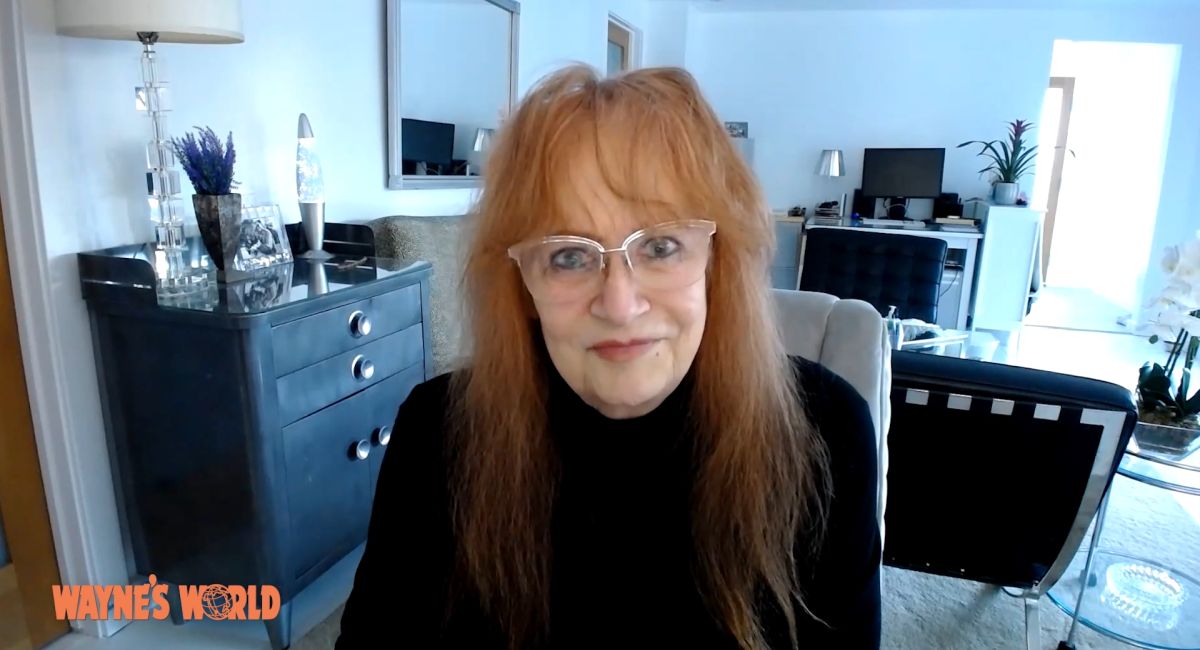 The groundbreaking 1992 comedy ‘Wayne’s World,’ which was based on the popular Saturday Night Live sketch and released a Limited-Edition Blu-ray Steelbook on February 1st, celebrates its 30th anniversary this month.

Moviefone recently had the pleasure of speaking with director Penelope Spheeris about the 30th anniversary of ‘Wayne’s World.’ She discussed how her previous work prepared her to direct the movie, working with Mike Myers and Dana Carvey, the iconic "Bohemian Rhapsody" scene, Alice Cooper’s special request, casting the late great Meat Loaf, and more.

You can read the full interview below or watch a video of the interview above.

Moviefone: As a filmmaker, what is it like for you to see that ‘Wayne’s World’ is still as beloved and relevant today as it was when it was first released 30 years ago?

Penelope Spheeris: It's actually kind of indescribable how it feels. I wish I had good words to describe how I feel that 30 years later people care about the movie and love the movie as much as they do. I feel really, really lucky for that. And really grateful that I was there at the right time, in the right place and with the right people. But honestly, I don't like to wallow in the glory of anything, but it's just astonishing that people still care about this movie.

MF: You can you take us back 30 years and talk about how you became the director of ‘Wayne’s World?’

PS: My agent sent me the script and said, "They're looking for a director for this Saturday Night Live skit, and it's over at Paramount". I was like, "You mean I might be able to get my foot in the studio door? That would be cool." So, I read the script and then I had to go to five different meetings. Then I had to meet with Mike, and then I had to jump through a hoop and balance a beach ball on my nose, and crawl on my belly like a reptile.

I had to do all those things. A lot of times it was like, "Man, this is like a lot of cross examination to get the gig.” A couple of times I remember walking off the lot thinking, "You know what? I don't care. I can't handle this". Then I kept going back and I'm sure glad I did.

MF: Considering your history working with comedians like Richard Pryor and Albert Brooks, and your work directing the ‘Decline of Western Civilization’ documentaries, it seems like you were uniquely qualified to direct ‘Wayne's World,’ because you already had experience with both comedy and rock 'n roll.

How did your past experience as a producer and documentary filmmaker prepare you to direct this movie?

PS: Well, that's a brilliant observation. Even I haven't thought of that. Thank you. I was prepared comically, and I was prepared musically. I guess it's just some cosmic coming together of the right things at the right time. I had no idea that I was going to be involved with a movie that has lasted this long and people love so much. None of us thought, "Oh, well, we're going to make this big hip movie and get rich and famous. And everybody will be dressing up their babies like Wayne and Garth for 30 years." None of us thought that.

We just thought, "Geez, we could make this little movie, and maybe we'll get it in a few theaters, and maybe I'll get another gig in Hollywood." So, I always tell people, young filmmakers, it's like stop with the rich and famous already, just go do the work. That's what we were doing back then.

MF: Since they created the characters on television, I would imagine Mike Myers and Dana Carvey came to set knowing exactly who Wayne and Garth are, which is something that doesn’t always happen with actors when you are making a movie.

What was that like for you directing them and getting the performances that you needed for the film?

PS: It was a total luck out, and good pleasure. I'll be honest with you, because as a director, if you have two leads coming in with characters that they don't know, you got a big job cut out for you, and you got to know those characters yourself. Mike and Dana already knew them.

So, I didn't have to go crazy trying to say, "Stay in character, stay on track. That's not what your character would say.” I didn't have to do any of that, they knew exactly what they would do, and wear, and say. So that made it easier to be honest with you. I don't look at it like, "Oh, I'm the director, you got to do what I say.” They knew, and I trusted them. I had to.

MF: The movie will forever be connected to the band Queen, and vice versa, because of the iconic “Bohemian Rhapsody” sequence. Can you talk about the process of shooting that scene?

PS: Well, I mean, when we shot it, and we didn't think, "Oh, people are going to be looking at this and loving it for so many decades.” We didn't think that. I knew that it would be a good title sequence, because I had shot a similar scene in the movie I did called ‘Dudes,’ where Flea and John Cryer were banging their heads in a Volkswagen driving across the desert.

So, I knew that that was a fun thing to be doing. But yeah, Mike had written “Bohemian Rhapsody” into the first draft. So, as much as people might want to give me credit for picking the song, I did not pick the song, it was Mike. I chose to shoot it the way I did, but he is the one that was smart enough to pick that song. What can I tell you, James Corden owes me a couple bucks!

MF: Is it true that the studio fought you on the song choice and didn’t want you to use ‘Bohemian Rhapsody?”

So, I definitely wouldn't want to license their song if they crapped out on me at the last minute when I did ‘The Metal Years’. So, this whole thing about somebody wanting to use Guns N' Roses is not true. I just want to put that on the table, and they could fight me to the death on that one because I know.

MF: But there was an issue with Alice Cooper only wanting to play a new song and not one of his classics in the movie, is that true?

PS: That's very smart of you, and here's the thing. Having worked with bands forever, most of them don't want to do their old music, they want to promote their new music. I understand that, because they want to be themselves, and they want to do their new material. I couldn't argue with Alice, because there was no time to argue. It was like, "Okay, we got to shoot this scene at the amphitheater, it's booked, and it costs a lot of money. So, let's get the band over there and set up the stage, and do it".

I wasn't in love with the song at the time. It's a goofy title. But Alice is a prince, and we threw three pages of dialogue at him, on the day he came in. He didn't even have a night to look at it. To this day even he says that he can't believe he remembered all that dialogue. We had to write these signs, we had to write prompter signs. We had people writing on them, so he could remember the lines. But he did it, and he looked perfectly natural doing it.

MF: Finally, you cast Meat Loaf in the movie, who unfortunately just passed. What are your memories of working with Meat Loaf?

PS: It's very tragic, of course, that Meat Loaf has gone, and very unexpected. He was way too young to go. He and I were very, very good friends during the 1980's when we would party at the Rainbow Bar, The Roxy, and Whiskey a Go Go. I have very fond memories of hanging out with him. And if anybody doesn't mind, I'll take the credit for casting him in that sweet role.

11 Must-See Musicial Biopics That Will Totally Rock You

Is Queen Really Hoping for a 'Bohemian Rhapsody' Sequel?