The ‘Speed Racer’ actor discusses his new film, which also stars John Cusack, as well as working with Quentin Tarantino on ‘Once Upon a Time in Hollywood.’ 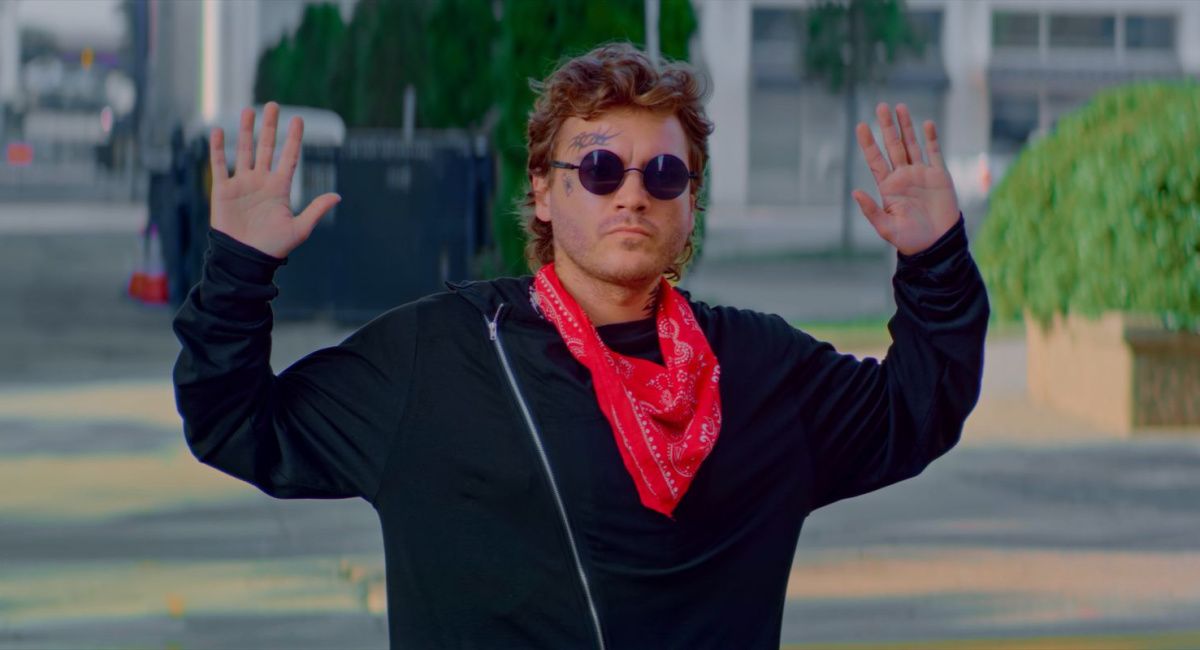 Opening in select theaters and On Demand beginning February 18th is the new action movie ‘Pursuit,’ from director Brian Skiba (‘Flowers and Honey’).

The film stars Emile Hirsch (‘Speed Racer’ and ‘Once Upon a Time in Hollywood’) as Rick Calloway, a ruthless hacker who's trying to save his kidnapped wife from a drug cartel. Pursued by the police, Rick must put his trust in his estranged gangster father, Jack Calloway, played by John Cusack (‘Grosse Pointe Blank’ and ‘Being John Malkovich’). Now the two must work together to elude the police and the drug cartel, if Rick has any hope of ever seeing his wife alive again.

Emile Hirsch has been acting professionally for over 25 years! The actor has appeared in such popular movies as ‘The Girl Next Door,’ ‘Lords of Dogtown,’ ‘Alpha Dog,’ ‘Into the Wild,’ ‘Milk,’ ‘Killer Joe,’ ‘Savages,’ ‘Lone Survivor,’ and most recently, Quentin Tarantino’s ‘Once Upon a Time in Hollywood’ as real-life Manson Family victim Jay Sebring. But Hirsch might be best known to audiences as the title character in the Wachowskis’ criminally underrated ‘Speed Racer.’

Moviefone recently had the pleasure of speaking with Emile Hirsch about his work on ‘Pursuit.’ The actor discussed his new movie, how he got involved with the project, reuniting with actor John Cusack, how his performance was inspired by Elon Musk, face tattoos, stunts, and working with Quentin Tarantino on the Oscar-winning ‘Once Upon a Time in Hollywood.’

You can read the full transcript of our interview with Emile Hirsch about ‘Pursuit’ below, or you can watch a video of the interview in the player above.

Moviefone: To begin with, can you talk about how you got involved in this project?

Emile Hirsch: So originally, I got involved with the film when they sent me the script and I found out that John Cusack was attached. I had worked with John Cusack on this film, ‘Never Grow Old.’ I just had an amazing experience with him. He's such a great actor and he was so good in ‘Never Grow Old.’ But this was a change of pace for us. This was making an action film, where it was more of a potboiler, kind of pulpy action genre film. I just thought we could have fun with it.

I wanted to bring a sense of humor and a sense of lightness to the character, and a goofiness. Because whenever I watch these action films, I like at least one of the characters to be the comic relief in a way. I think that Rick turns into that at a certain point. At first, you think he's this normal guy. Then you realize just how demented he really is. He has no morals. He's a cold-blooded killer. He's not a very good guy. I think when you realize just how off-the-reservation he is, it's a lot more fun. I knew that it would be a good experience working again with John.

MF: What do you like about working with John Cusack, and what have you learned about acting from working with him over the years?

EH: One of the things that John is great at, is he's very experimental when he does scenes. He's constantly willing to try new things and to go down a way in a scene, and just sort of explore that and then try something totally different. He likes to try different beats until he finds one that he really likes, which is great. It's like mining for gold. You can stumble upon greatness.

He also has a really good logic to the way he breaks down scenes. He understands script analysis really well. It's one of those innate things. He's just a talented actor. Sometimes you can't even necessarily describe what that is, but when you're in the scene with someone that's like that, you just know it.

MF: Do you like working like that? Do you enjoy having a lot of takes, as you put it, “to mine for gold?”

EH: I've been doing it so long now to where I find every different way of working, and there's something fun about it. So, I'll work with a director who only wants to do two takes. That will become exciting. That will become, "Oh, my gosh, we got to get it," or, "What is it going to be?" There's a certain pressure and a thrill to it. I'll work with directors who want to do twenty takes. Then the excitement is, "Okay, we are going to master this. We're going to try it so many different ways. We are going to find the exact, perfect, weird, most nuanced take we can think of." So, I think it's more about having a positive attitude to where you're able to enjoy whatever process comes at you.

There's a lot of actors out there that if it's not the process and the way that they exactly want to work, then maybe they have an issue or they're not as happy. But my philosophy has always been embracing the process that the project is going to be done under, whether it's from the schedule, the time you have, or the director, or the producers, or whatever, and you have the most fun with it in the way that you can. Don't go on the Goliath rollercoaster, expecting it to be the Mad Tea Party ride and vice versa. Have a good time on whatever ride you're on.

MF: I understand that you pulled inspiration for your character Rick Calloway, from CEO of Tesla Motors Elon Musk. Can you talk about how that inspiration helped you to create the character?

EH: I had read the script. It was a little bit of deadpan humor, kind of an offbeat character, a nerdy hacker guy. I was watching that famous Joe Rogan interview with Elon Musk. It was in the news and everything. I had never actually seen Elon Musk talk before. So, I'd always seen these very dapper, svelte pictures of him. Then when I actually saw him talk, I realized how intelligent he comes across. Nerd is probably not the right word, but something in that ballpark, where it's like, "Okay, I can see this guy's like a rocket scientist, very easily." But I also really appreciated his deadpan sense of humor a lot.

So, I didn't put a bunch of posters of Elon up in my bedroom and play the tapes back of how we talked between takes or anything like that. I just watched that one interview. Based off of that, I said, "That's a direction. That's a flavor that I want to try to capture a little bit." But he was definitely the inspiration for it, which is kind of funny. It's this crazy pulp action movie, ‘Pursuit’. It's like, "Do you want to see this guy try to play Elon Musk? Then check this movie out!"

MF: Can you also talk about creating the specific look for your character?

EH: The character in the script comes across almost like ‘The Boy with the Dragon Tattoo,’ where he's this hacker. He's got all these tattoos. So, I said, "Well, we can't just give him a bunch of tattoos or piercings, because that's too much like Lisbeth Salander in those books. So, let's give him some face tattoos. Let's go full Mike Tyson and Post Malone, and make it kind of weird and shocking."

There was something strange about a hacker with face tattoos. But there are a lot of these guys, now. I mean, face tattoos are more popular than ever. The kids these days are, if you haven't noticed, out of their minds, and the face tattoos, a lot of them have them. So, I was like, "All right, let's just give him some face tattoos."

MF: You have a lot of action sequences and stunts in the film. Is that fun for you to do when you get an opportunity to do those types of scenes on a project?

EH: Getting to do stunts, it's a challenge. You want to do it right, especially when you're doing a lot of weapons work with Uzis and full blank rounds. With the Uzis, there's an element of danger anytime you do these types of extended gun fight sequences with these really powerful weapons. But it's also a lot of fun. It's undeniably a blast. It's a great time. I'm kind of a dude with a “capital D” in a sense, where I like watching an action movie. I like firing my crazy Uzi with my circle-framed sunglasses on in slow-mo. I'm like, "Yeah, that looks pretty cool!"

MF: Finally, what was it like for you to work with Quentin Tarantino on his masterpiece, ‘Once Upon a Time in Hollywood?’

EH: I mean, working with Quentin was a lifelong dream of mine. I grew up watching his films, loving his films. I met him years and years before. I think I met him at the premiere of 'The Green Mile,' when I was 14 years old. He wouldn't remember this. But he knew a woman that was there and said, "Hi." I was with her daughter and I got to say hi. I said, "I love ‘Reservoir Dogs.’" He asked, "Who's your favorite dog?" I didn't understand what he meant. I said, "A Dalmatian." He said, "No, no, no. Your favorite ‘Reservoir Dog.’" And I went, "Oh, oh, oh, Mr. Blonde." Then he said, "Oh, yes, Mr. Blonde.”

Then years later, I get to know him. I think one of the reasons why Quentin and I originally got along is that he was the guy that always worked in the video store growing up and was the video store master. Growing up as a kid, I was always in the video store, renting every genre film and watching films. He's a way bigger film nerd than me, but for an actor, I'm a film nerd, as far as that scale goes.

So, we always got along over the years based off of that similarity. Then when he gave me the role of playing Jay Sebring in ‘Once Upon a Time in Hollywood,’ every day I was pinching myself, because I was so grateful to be there. I knew what an amazing opportunity it was to get to be a part in his filmography, really. I mean, he doesn't make very many films. So, that's pretty cool.