A combination of ‘eXistenZ and ‘Crash,’ Cronenberg’s latest film has fascinating characters and an interesting story but gets buried by its own deliberate weirdness. 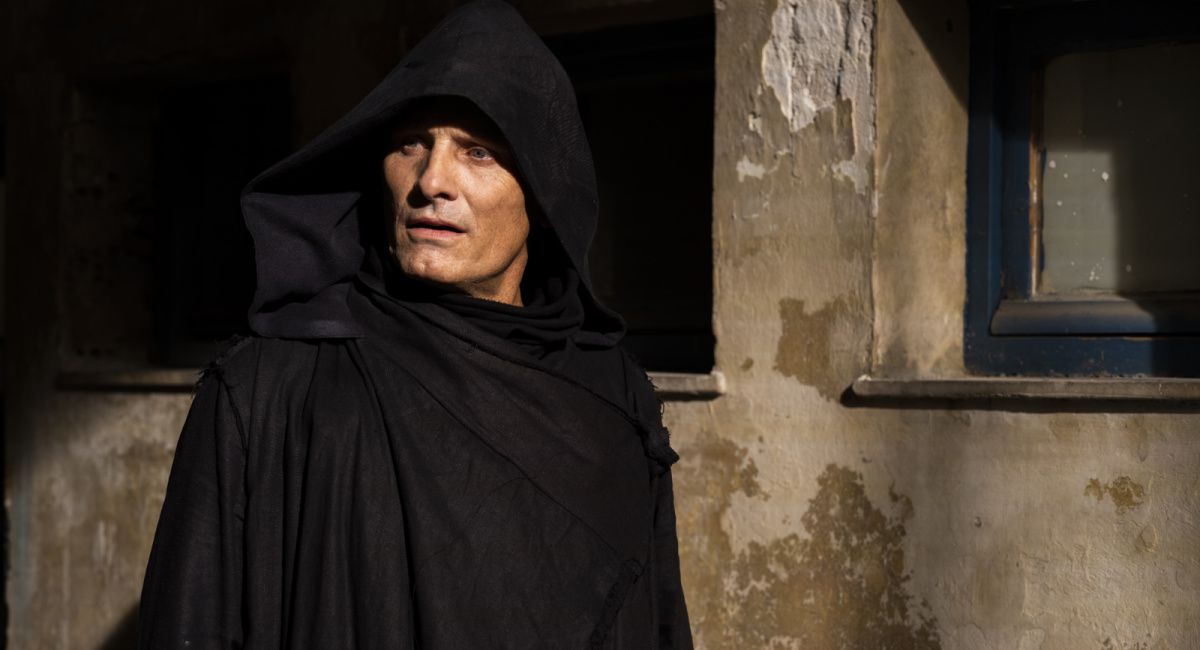 Viggo Mortensen in David Cronenberg’s ‘Crimes of the Future.' Photo courtesy of Neon.

Opening in theaters on June 3rd is the new film from legendary director David Cronenberg (‘The Fly’) entitled ‘Crimes of the Future.’ The new movie stars Viggo Mortensen and Lea Seydoux as a pair of famous performance artists, and also features Kristen Stewart, Don McKellar, and Scott Speedman.

The result is a very David Cronenberg movie that feels like a cross between ‘eXistenZ' and ‘Crash,’ and features strong performances from its leads and some fascinating themes that ultimately get lost by the strangeness of the world Cronenberg has created.

‘Crimes of the Future’ takes place in a world where “Accelerated Evolution” is possible, physical pain has become a thing of the past, and “surgery is the new sex.” Saul Tanner (Mortensen) and Caprice (Seydoux) are performance artists that become famous for repeatedly removing Saul’s new organs. They soon meet Wippet (McKellar), from the National Organ Registry, and his assistant Timlin (Stewart), who becomes obsessed with Saul and his abilities.

Meanwhile, an 8-year-old boy that eats plastic is murdered by his mother. His father (Speedman) takes drastic measures by begging Saul and Caprice to use the body in their act and reveal the truth about his death through an on-stage autopsy. Saul has become weak from his surgeries and the boy’s autopsy might hold the secrets to his own existence.

It’s worth noting that David Cronenberg made a film in 1970 also called ‘Crimes of the Future,’ which has no connection to this movie. The new film is neither a sequel or a remake to the original, they just share the same title.

Cronenberg has built a reputation of creating weird worlds in films such as ‘Scanners,’ ‘Naked Lunch,’ and ‘eXistenZ’ but in recent years has made more realistic movies like ‘Crash,’ ‘A History of Violence,’ ‘Eastern Promises,’ ‘A Dangerous Method,’ and ‘Maps to the Stars.’ With ‘Crimes of the Future,’ the director returns to his earlier work with a film filled with weird characters and visuals that examines our own world. However, the movie feels buried by the weight of its oddness, and often loses the idea of the themes that it is trying to express.

(L to R) Léa Seydoux and Viggo Mortensen in David Cronenberg’s ‘Crimes of the Future.' Photo courtesy of Neon.

What Cronenberg does well is create a creepy and disturbing world for his characters to exist in and his themes to be explored. However, exactly what themes is he trying to explore becomes the question. He’s established a fascinating world where pain is obsolete, and surgery and body manipulation has replaced sex as pleasure. I’d like to think this is commentary on our own world where face tattoos and body piercings have become the norm, but it’s hard to say since that idea is eventually muddied by the intricate plot.

There is also an environmental theme, which involves the boy who eats plastic, a sub-plot that becomes the main-plot by the film’s end. But again, if Cronenberg is trying to say something about protecting the environment, it is lost amongst the colorful world and bizarre characters that he includes in the film.

But the film is worth watching for Viggo Mortensen and Lea Seydoux’s performances, which are both layered and completely unique. Mortensen, who is a constant Cronenberg collaborator, physically transforms himself with this role. You never for a moment doubt the believability of his performance, while the deep emotion of his circumstance comes shining through.

Seydoux plays Caprice as a damaged soul trying to find her purpose in this world, and the actress makes her character’s feelings for Saul very clear. Yes, there is love between the two, but more importantly, a mutual respect.

(L to R) Kristen Stewart and Léa Seydoux in David Cronenberg’s ‘Crimes of the Future.' Photo courtesy of Neon.

While Mortensen and Seydoux give strong lead performances, the supporting cast stumbles, especially Kristen Stewart, who plays against type as the awkward Timlin. Stewart’s character seems out of place, even in this world, and never quite fits within the tone of the film.

Actor Scott Speedman, who plays a father who’s lost his son, fails to reach any level of recognizable emotion that you would expect from a character dealing with the loss of a child. The role does nothing more than service the plot, and the actor’s performance does nothing to elevate the role.

In the end, David Cronenberg has gone “Full-Cronenberg” with this film, and fans of the director’s classic movies will enjoy the weirdness that the filmmaker has created. But, the average audience member will be confused by the unique world and characters, and the film’s obtuse and confusing plot.

Crimes of the Future

Here Are 7 Hidden Gems From Your Favorite Horror Directors

9 Star Wars Movies That You Will Never See