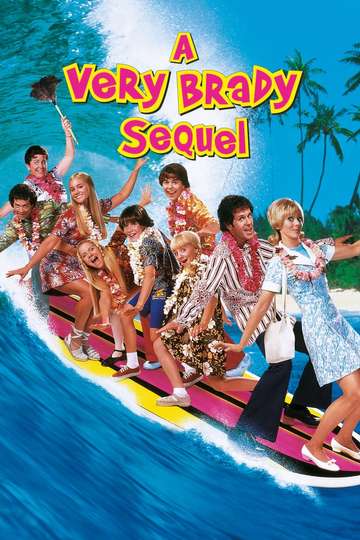 Want to watch 'A Very Brady Sequel' on your TV or mobile device at home? Discovering a streaming service to buy, rent, download, or watch the Arlene Sanford-directed movie via subscription can be tricky, so we here at Moviefone want to do right by you.

We've listed a number of streaming and cable services - including rental, purchase, and subscription alternatives - along with the availability of 'A Very Brady Sequel' on each platform when they are available. Now, before we get into the various whats and wheres of how you can watch 'A Very Brady Sequel' right now, here are some particulars about the Paramount comedy flick.

Released August 23rd, 1996, 'A Very Brady Sequel' stars Shelley Long, Gary Cole, Christopher Daniel Barnes, Christine Taylor The PG-13 movie has a runtime of about 1 hr 30 min, and received a user score of 59 (out of 100) on TMDb, which put together reviews from 125 well-known users.

Want to know what the movie's about? Here's the plot: "A man claiming to be Carol Brady's long-lost first husband, Roy Martin, shows up at the suburban Brady residence one evening. An impostor, the man is actually determined to steal the Bradys' familiar horse statue, a $20-million ancient Asian artifact."

Pee-wee's Big Holiday
"He Is Back!"
Not Cool
A Very Brady Christmas
Best Worst Movie
"The Story Behind The Worst Movie Ever Made - Troll 2"
The Brady Bunch Movie
"They're back to save America from the '90s."
A Kid Like Jake
Ace Ventura Jr: Pet Detective

Strangers with Candy
"Going to high school for the first time is always scary... Especially the second time around."
Brady Bunch Home Movies
"Brady Bunch"
The Adventures of Rocky & Bullwinkle
"This summer it's not the same old bull."
Peter Pan
Sarah Silverman: We Are Miracles
Hairspray Live!
"You can't stop the beat!"
Hairspray
"The world was in a mess... but their hair was perfect!!"
The Brady Bunch in the White House
The Six Degrees of Helter Skelter
"Enter the demented mind of Charles Manson."
The Brady Girls Get Married
To Be Takei
"A star’s trek for life, liberty, and love."
Transformer
Serial Mom
"Every Mom Wants to Be Wanted, But Not For Murder!"
Sundance Skippy