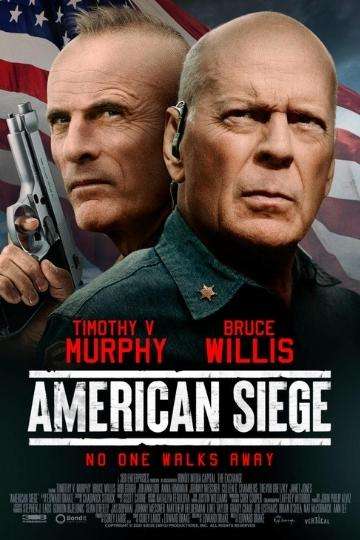 Fancy watching 'American Siege' on your TV, phone, or tablet? Finding a streaming service to buy, rent, download, or watch the Edward Drake-directed movie via subscription can be a huge pain, so we here at Moviefone want to do the heavy lifting.

We've listed a number of streaming and cable services - including rental, purchase, and subscription alternatives - along with the availability of 'American Siege' on each platform when they are available. Now, before we get into all the details of how you can watch 'American Siege' right now, here are some details about the The Exchange, Arcana Studio, 308 Enterprises, Vertical Entertainment, BondIt Media Capital crime flick.

Released January 7th, 2022, 'American Siege' stars Timothy V. Murphy, Bruce Willis, Rob Gough, Anna Louise Morse The R movie has a runtime of about 1 hr 30 min, and received a user score of 57 (out of 100) on TMDb, which collated reviews from 101 knowledgeable users.

You probably already know what the movie's about, but just in case... Here's the plot: "An ex-NYPD officer-turned-sheriff of a small rural Georgia town has to contend with a gang of thieves who have taken a wealthy doctor hostage."

American Sicario
"The story of America's most dangerous drug trafficker."
Utøya: July 22
"The day that changed us forever"

The Requin
Fistful of Vengeance
¿Y cómo es él?
Heli
Tom and Jerry Cowboy Up!
"The Wild, Wild West just got wilder with Tom and Jerry on the ranch!"
Westworld
"Where robot men and women are programmed to serve you for ...Romance ...Violence ...Anything."
Furioza

National Champions
"How much is one player worth in an $18 billion game?"

Last Man Down
"They will pay."

The Bob's Burgers Movie
"Get your buns in theaters."
Final Score
"It's all about to kick off"
The Hunting
"Hunger runs deep."
Looop Lapeta
One Shot
"Escape is just the beginning"
Arctic Apocalypse

The 355
"Work together or die alone."
Malnazidos
The Jack in the Box: Awakening
"Once you open the box... you can't escape it."