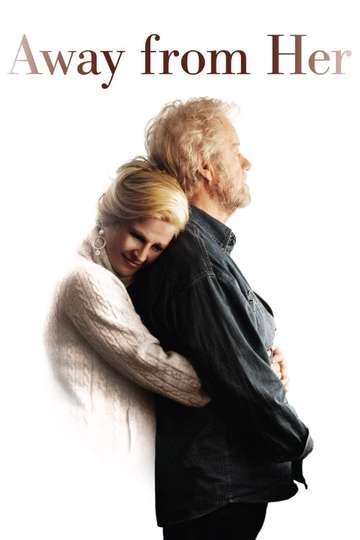 Away from Her (2007)Stream and Watch Online

Looking to watch 'Away from Her' on your TV or mobile device at home? Finding a streaming service to buy, rent, download, or view the Sarah Polley-directed movie via subscription can be a huge pain, so we here at Moviefone want to do the heavy lifting.

We've listed a number of streaming and cable services - including rental, purchase, and subscription choices - along with the availability of 'Away from Her' on each platform when they are available. Now, before we get into the nitty-gritty of how you can watch 'Away from Her' right now, here are some particulars about the Téléfilm Canada, The Movie Network, Echo Lake Entertainment, HanWay Films, Astral Media, Corus Entertainment, Foundry Films, Movie Central, Ontario Media Development Corporation (OMDC), Super Écran, CBC, The Film Farm, Capri Releasing, Hollydan Works, Pulling Focus Pictures drama flick.

Released May 25th, 2007, 'Away from Her' stars Gordon Pinsent, Julie Christie, Michael Murphy, Olympia Dukakis The PG-13 movie has a runtime of about 1 hr 50 min, and received a user score of 71 (out of 100) on TMDb, which collated reviews from 178 experienced users.

Interested in knowing what the movie's about? Here's the plot: "A man coping with the institutionalization of his wife because of Alzheimer's disease faces an epiphany when she transfers her affections to another man, a wheel chair-bound mute who also is a patient at the nursing home."

'Away from Her' is currently available to rent, purchase, or stream via subscription on Hoopla, Apple iTunes, Vudu, Amazon Video, Microsoft Store, Google Play Movies, YouTube, and Tubi TV .

'Away from Her' Release Dates

Inception
"Your mind is the scene of the crime."
Melancholia
"Enjoy it while it lasts"