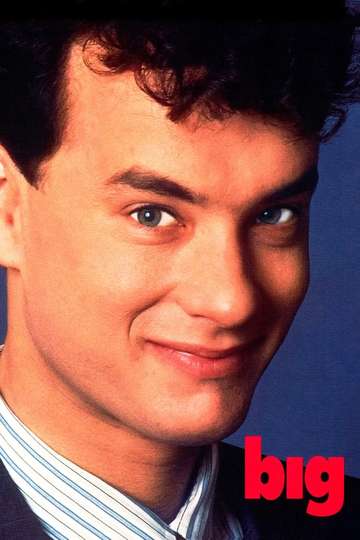 Fancy watching 'Big' on your TV, phone, or tablet? Finding a streaming service to buy, rent, download, or watch the Penny Marshall-directed movie via subscription can be tricky, so we here at Moviefone want to do the work for you.

Below, you'll find a number of top-tier streaming and cable services - including rental, purchase, and subscription choices - along with the availability of 'Big' on each platform when they are available. Now, before we get into the various whats and wheres of how you can watch 'Big' right now, here are some particulars about the Gracie Films, 20th Century Fox, American Entertainment Partners II L.P. fantasy flick.

Want to know what the movie's about? Here's the plot: "When a young boy makes a wish at a carnival machine to be big—he wakes up the following morning to find that it has been granted and his body has grown older overnight. But he is still the same 13-year-old boy inside. Now he must learn how to cope with the unfamiliar world of grown-ups including getting a job and having his first romantic encounter with a woman."

A League of Their Own
"To achieve the incredible, you have to attempt the impossible."
The 'Burbs
"He's a man of peace in a savage land... Suburbia."
The Money Pit
"For everyone who's ever been deeply in Love or deeply in debt."
Beetlejuice
"He's guaranteed to put some life in your afterlife."
Who Framed Roger Rabbit
"It's the story of a man, a woman, and a rabbit in a triangle of trouble."
Cast Away
"At the edge of the world, his journey begins."
Honey, I Shrunk the Kids
"The most astonishing, innovative, backyard adventure of all time!"
You've Got Mail
"Someone you pass on the street may already be the love of your life."

The Terminal
"Life is waiting."
Philadelphia
"No one would take on his case... until one man was willing to take on the system."
Ferris Bueller's Day Off
"One man's struggle to take it easy."
Hook
"What if Peter Pan grew up?"
Rain Man
"A journey through understanding and fellowship."
That Thing You Do!
"In every life there comes a time when that dream you dream becomes that thing you do."
Splash
"Allen Bauer Thought He'd Never Find The Right Woman... He Was Only Half Wrong!"
Turner & Hooch
"The Oddest Couple Ever Unleashed!"
Mrs. Doubtfire
"She makes dinner. She does windows. She reads bedtime stories. She's a blessing... in disguise."
Dragnet
""Just The Facts.""