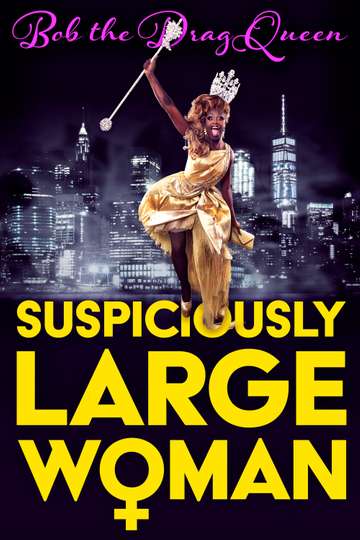 Need to watch 'Bob the Drag Queen: Suspiciously Large Woman' in the comfort of your own home? Searching for a streaming service to buy, rent, download, or watch the Cheyenne Picardo-directed movie via subscription can be tricky, so we here at Moviefone want to do right by you.

Below, you’ll find a number of top-tier streaming and cable services - including rental, purchase, and subscription options - along with the availability of 'Bob the Drag Queen: Suspiciously Large Woman' on each platform. Now, before we get into the nitty-gritty of how you can watch 'Bob the Drag Queen: Suspiciously Large Woman' right now, here are some specifics about the The Only Productions comedy flick.

Released July 14th, 2017, 'Bob the Drag Queen: Suspiciously Large Woman' stars Bob the Drag Queen The R movie has a runtime of about 57 min, and received a user score of 58 (out of 100) on TMDb, which put together reviews from 6 top users.

Want to know what the movie's about? Here's the plot: "Drag Superstar Bob the Drag Queen arrives purse first and ready to take prisoners in her debut comedy special, Suspiciously Large Woman, fresh off the world premiere at the 2017 Outfest in Los Angeles. No one is safe when the winner of RuPaul's Drag Race season 8 returns to her hometown of Atlanta after touring the world to hilariously tackle topics such as sex, white people, New York, and the one and only BeyoncÃ©."