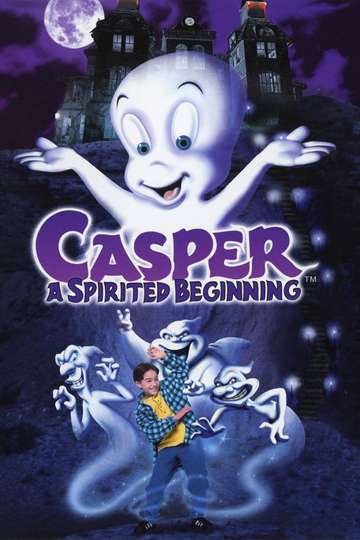 Need to watch 'Casper: A Spirited Beginning' on your TV or mobile device at home? Tracking down a streaming service to buy, rent, download, or watch the Sean McNamara-directed movie via subscription can be difficult, so we here at Moviefone want to do right by you.

We've listed a number of streaming and cable services - including rental, purchase, and subscription alternatives - along with the availability of 'Casper: A Spirited Beginning' on each platform when they are available. Now, before we get into the nitty-gritty of how you can watch 'Casper: A Spirited Beginning' right now, here are some details about the 20th Century Fox, 20th Century Fox Home Entertainment, The Harvey Entertainment Company adventure flick.

Released September 9th, 1997, 'Casper: A Spirited Beginning' stars Steve Guttenberg, Lori Loughlin, Rodney Dangerfield, Michael McKean The PG movie has a runtime of about 1 hr 30 min, and received a user score of 55 (out of 100) on TMDb, which put together reviews from 251 well-known users.

Want to know what the movie's about? Here's the plot: "A prequel to the first animated/live-action Casper feature, Casper: A Spirited Beginning introduces the friendliest ghost you'll ever know and explains how Casper met and befriended the other ghouls at Applegate Manor. After being stranded, Casper meets young Chris Carson, a lonely kid who decides to teach Casper how to be a proper ghost" .

Garfield: A Tail of Two Kitties
"The Ego has landed."
Casper Meets Wendy
"A Bewitching New Live-Action Movie!"
Alvin and the Chipmunks
"The Original Entourage"
Stuart Little 2
"A Little goes a long way."
Home Alone 3
"Ready for more. Much more."
The Barbie Diaries
Scooby-Doo
"Be afraid. Be kind of afraid."

Babe
"A little pig goes a long way."
Casper
"Seeing is believing"
The Haunted Mansion
"Check your pulse at the door... if you have one."
The Visitors
"They weren't born yesterday!"
The Flintstones
"Yabba-Dabba-Doo!"
The Aristocats
"A tune-filled animated extravaganza."

Stuart Little
"The Little family just got bigger."
Casper's Haunted Christmas
Glamour Girls
101 Dalmatians
"So many dogs. So little time."
Sister Act
"No booze! No sex! No drugs!... No way!"
Beethoven
"The head of the family is the one with the tail."