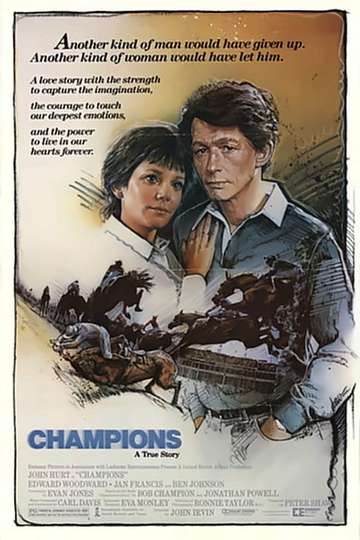 Need to watch 'Champions' on your TV, phone, or tablet? Searching for a streaming service to buy, rent, download, or watch the John Irvin-directed movie via subscription can be tricky, so we here at Moviefone want to do the work for you.

Read on for a listing of streaming and cable services - including rental, purchase, and subscription alternatives - along with the availability of 'Champions' on each platform. Now, before we get into the nitty-gritty of how you can watch 'Champions' right now, here are some details about the Ladbroke, United British Artists (UBA) drama flick.

Released April 20th, 1984, 'Champions' stars John Hurt, Jan Francis, Edward Woodward, Ben Johnson The movie has a runtime of about 1 hr 46 min, and received a user score of 70 (out of 100) on TMDb, which collated reviews from 12 well-known users.

What, so now you want to know what the movie’s about? Here's the plot: "The true story of jockey Bob Champion who overcame cancer to win the 1981 Grand National"

'Champions' is currently available to rent, purchase, or stream via subscription on Apple iTunes, Amazon Video, and Vudu .