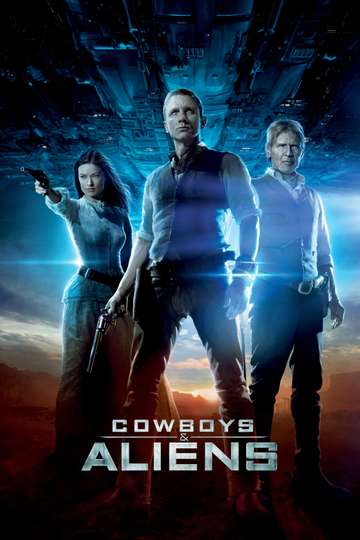 Want to behold the glory that is 'Cowboys & Aliens' on your TV or mobile device at home? Searching for a streaming service to buy, rent, download, or view the Jon Favreau-directed movie via subscription can be a challenge, so we here at Moviefone want to do the heavy lifting.

We've listed a number of streaming and cable services - including rental, purchase, and subscription alternatives - along with the availability of 'Cowboys & Aliens' on each platform when they are available. Now, before we get into the nitty-gritty of how you can watch 'Cowboys & Aliens' right now, here are some particulars about the DreamWorks Pictures, Imagine Entertainment, Universal Pictures, Reliance Entertainment, Relativity Media, K/O Paper Products, Fairview Entertainment, Platinum Studios thriller flick.

What, so now you want to know what the movie's about? Here's the plot: "A stranger stumbles into the desert town of Absolution with no memory of his past and a futuristic shackle around his wrist. With the help of mysterious beauty Ella and the iron-fisted Colonel Dolarhyde, he finds himself leading an unlikely posse of cowboys, outlaws, and Apache warriors against a common enemy from beyond this world in an epic showdown for survival."

John Carter
"Lost in our world, found in another."
G.I. Joe: The Rise of Cobra
"When all else fails, they don't."
Super 8
"It Arrives."

Transformers: Revenge of the Fallen
"Revenge is coming."
Terminator Salvation
"The End Begins."
Green Lantern
"In our darkest hour, there will be light."
Independence Day
"Don't make plans for August."

Indiana Jones and the Kingdom of the Crystal Skull
"The adventure continues . . ."
TRON: Legacy
"The game has changed."
Clash of the Titans
"Titans will clash."
Men in Black
"Protecting the Earth from the scum of the universe."
The A-Team
"There Is No Plan B"

Total Recall
"What Is Real?"

Men in Black II
"Back in black."

Wrath of the Titans
"Feel the Wrath"
Battle: Los Angeles
"It's not war. It's survival."

District 9
"You are not welcome here."