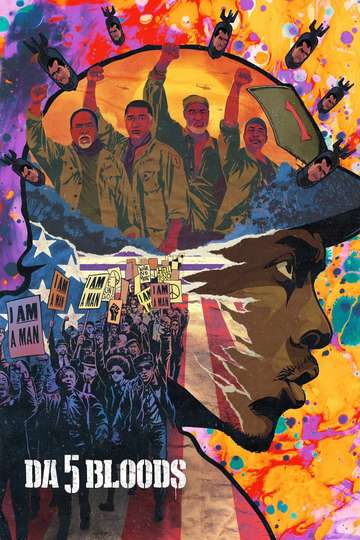 Yearning to watch 'Da 5 Bloods' on your TV, phone, or tablet? Tracking down a streaming service to buy, rent, download, or view the Spike Lee-directed movie via subscription can be difficult, so we here at Moviefone want to do right by you.

Read on for a listing of streaming and cable services - including rental, purchase, and subscription choices - along with the availability of 'Da 5 Bloods' on each platform when they are available. Now, before we get into the nitty-gritty of how you can watch 'Da 5 Bloods' right now, here are some finer points about the 40 Acres and a Mule Filmworks, Rahway Road Productions drama flick.

Released June 12th, 2020, 'Da 5 Bloods' stars Delroy Lindo, Jonathan Majors, Clarke Peters, Norm Lewis The R movie has a runtime of about 2 hr 36 min, and received a user score of 66 (out of 100) on TMDb, which assembled reviews from 870 knowledgeable users.

Want to know what the movie's about? Here's the plot: "Four African-American Vietnam veterans return to Vietnam. They are in search of the remains of their fallen squad leader and the promise of buried treasure. These heroes battle forces of humanity and nature while confronted by the lasting ravages of the immorality of the Vietnam War."

'Da 5 Bloods' is currently available to rent, purchase, or stream via subscription on Netflix, .

Crip Camp: A Disability Revolution
Color of Justice
"It isn't just Black and White."
Leaving Normal
"Sometimes the only way to find where you're going is to lose your way"
A Gathering of Old Men

Sound of Metal
"Music was his world. Then silence revealed a new one."
Daniel
Citizen Ruth
"Life, liberty, money and the pursuit of happiness. She's gotta have it."

Mank
Eulogy
"A comedy that puts the *fun* back in funeral."
Feeling Through
The Broken Hearts Club: A Romantic Comedy
"The shortest distance between friends isn't always a straight line."

One Night in Miami...
"Four legends. One legendary night."

Pieces of a Woman
Coupe de Ville
"A comedy for everyone who ever struggled to love a brother...or strangle one."
Category 6: Day of Destruction

Death of a Dynasty
Hurry Sundown
"They are dynamite in love and in anger!"
Dominick and Eugene
Dummy
"Sometimes you need a little help finding yourself."