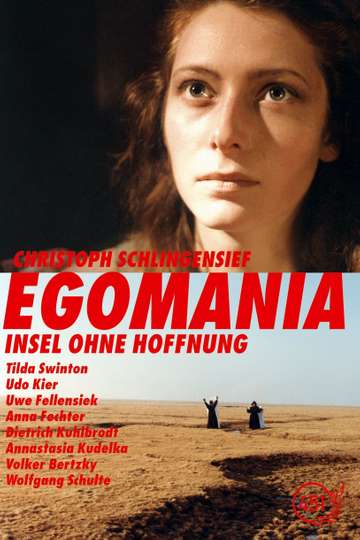 Need to watch 'Egomania: Island Without Hope' in the comfort of your own home? Hunting down a streaming service to buy, rent, download, or watch the Christoph Schlingensief-directed movie via subscription can be confusing, so we here at Moviefone want to take the pressure off.

Read on for a listing of streaming and cable services - including rental, purchase, and subscription choices - along with the availability of 'Egomania: Island Without Hope' on each platform. Now, before we get into the nitty-gritty of how you can watch 'Egomania: Island Without Hope' right now, here are some finer points about the DEM Film drama flick.

Released , 'Egomania: Island Without Hope' stars Udo Kier, Tilda Swinton, Uwe Fellensiek, Anna Fechter The movie has a runtime of about 1 hr 24 min, and received a user score of 58 (out of 100) on TMDb, which compiled reviews from 5 well-known users.

You probably already know what the movie's about, but just in case... Here's the plot: "Egomania is a visually stunning end-of-the-world melodrama about lust, jealousy and murder set amidst solar eclipses, orchestral chants and the distant thunder of the boiling sea. The film’s characters – riddled with unconscious desires – find themselves imprisoned on an island. Drawing parallels to the work of British filmmaker Derek Jarman and staring Jarman’s actress-muse Tilda Swinton, Schlingensief’s raw and almost mythological film stands in contrast to his more offensive efforts."

'Egomania: Island Without Hope' is currently available to rent, purchase, or stream via subscription on Amazon Video .