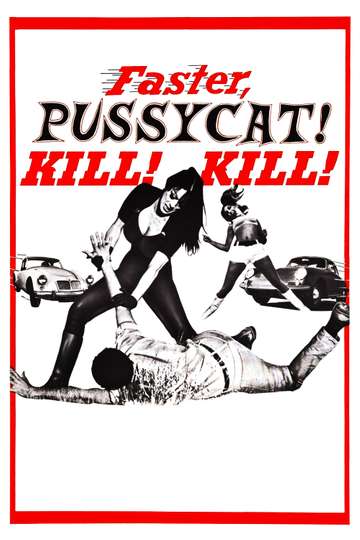 Yearning to watch 'Faster, Pussycat! Kill! Kill!' in the comfort of your own home? Finding a streaming service to buy, rent, download, or view the Russ Meyer-directed movie via subscription can be challenging, so we here at Moviefone want to help you out.

Read on for a listing of streaming and cable services - including rental, purchase, and subscription options - along with the availability of 'Faster, Pussycat! Kill! Kill!' on each platform when they are available. Now, before we get into all the details of how you can watch 'Faster, Pussycat! Kill! Kill!' right now, here are some specifics about the Eve Productions Inc. comedy flick.

Released August 6th, 1965, 'Faster, Pussycat! Kill! Kill!' stars Tura Satana, Haji, Lori Williams, Sue Bernard The NR movie has a runtime of about 1 hr 24 min, and received a user score of 64 (out of 100) on TMDb, which assembled reviews from 242 respected users.

Want to know what the movie's about? Here's the plot: "Three strippers seeking thrills encounter a young couple in the desert. After dispatching the boyfriend, they take the girl hostage and begin scheming on a crippled old man living with his two sons in the desert, reputedly hiding a tidy sum of cash. They become house guests of the old man and try and seduce the sons in an attempt to locate the money, not realizing that the old man has a few sinister intentions of his own."

'Faster, Pussycat! Kill! Kill!' is currently available to rent, purchase, or stream via subscription on Plex, .

Scream
"Someone has taken their love of scary movies one step too far."

Jaws
"Don't go in the water"

Get Out
"Just because you're invited, doesn't mean you're welcome."
Death Race 2000
"A Cross Country Road Wreck!"
Bill & Ted's Excellent Adventure
"History is about to be rewritten by two guys who can't spell."

Lost in Translation
"Everyone wants to be found."
Halloween
"The Night He Came Home!"

Kill Bill: Vol. 2
"The bride is back for the final cut."
Reservoir Dogs
"Every dog has his day."
Taxi Driver
"On every street in every city, there's a nobody who dreams of being a somebody."
Blade Runner
"Man has made his match... now it's his problem."
Nosferatu
"A symphony of horror."
A Clockwork Orange
"Being the adventures of a young man whose principal interests are rape, ultra-violence and Beethoven."
The Cabinet of Dr. Caligari
"You must become Caligari!"
Girl-Hearted
Psycho
"A new—and altogether different—screen excitement!"
Edward Scissorhands
"His scars run deep."