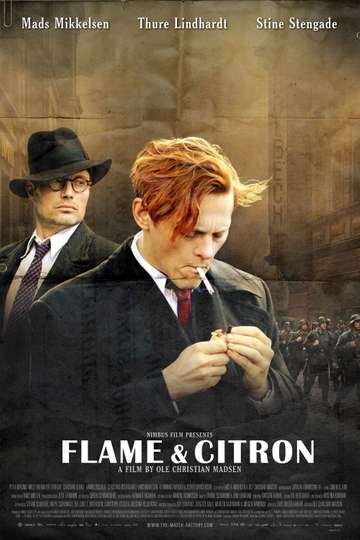 TMDb Score
69
NR 2 hr 10 minMar 25th, 2008History, Drama, War
During Nazi occupation, red-headed Bent Faurschou-Hviid ("Flame") and Jørgen Haagen Schmith ("Citron"), assassins in the Danish resistance, take orders from Winther, who's in direct contact with Allied leaders. One shoots, the other drives. Until 1944, they kill only Danes; then Winther gives orders to kill Germans. When a target tells Bent that Winther's using them to settle private scores, doubt sets in, complicated by Bent's relationship with the mysterious Kitty Selmer, who may be a double agent. Also, someone in their circle is a traitor. Can Bent and Jørgen kill an über-target, evade capture, and survive the war? And is this heroism, naiveté, or mere hatred?
Show More
DirectorOle Christian Madsen
StarringThure LindhardtMads MikkelsenStine Stengade
Movie DetailsWhere to WatchFull Cast & CrewNews

5 Things You Need to Know Before You See 'Rogue One'

6 Things You Need to Know Before Seeing Marvel's 'Doctor Strange'

Downfall
In April of 1945, Germany stands at the brink of defeat with the Russi...

Flags of Our Fathers
There were five Marines and one Navy Corpsman photographed raising the...

The Outlaw Josey Wales
After avenging his family's brutal murder, Wales is pursued by a pack...

Black Book
In the Nazi-occupied Netherlands during World War II, a Jewish singer...

The Way Back
At the dawn of WWII, several men escape from a Russian gulag—to take a...

The Girl Who Kicked the Hornet's Nest
After taking a bullet to the head, Salander is under close supervision...

Harry Brown
An elderly ex-serviceman and widower looks to avenge his best friend's...