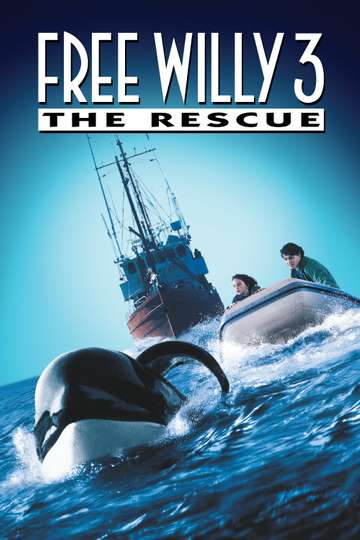 Want to watch 'Free Willy 3: The Rescue' on your TV or mobile device at home? Discovering a streaming service to buy, rent, download, or watch the Sam Pillsbury-directed movie via subscription can be difficult, so we here at Moviefone want to do right by you.

We've listed a number of streaming and cable services - including rental, purchase, and subscription options - along with the availability of 'Free Willy 3: The Rescue' on each platform when they are available. Now, before we get into the various whats and wheres of how you can watch 'Free Willy 3: The Rescue' right now, here are some specifics about the Warner Bros. Pictures, Regency Enterprises, Donner/Shuler-Donner Productions family flick.

Released August 8th, 1997, 'Free Willy 3: The Rescue' stars Jason James Richter, August Schellenberg, Annie Corley, Vincent Berry The PG movie has a runtime of about 1 hr 26 min, and received a user score of 63 (out of 100) on TMDb, which assembled reviews from 294 well-known users.

You probably already know what the movie's about, but just in case... Here's the plot: "Willy the whale is back, this time threatened by illegal whalers making money off sushi. Jesse, now 16, has taken a job on an orca-researching ship, along with old friend Randolph and a sarcastic scientist, Drew. On the whaler's ship is captain John Wesley and his son, Max, who isn't really pleased about his father's job, but doesn't have the gut to say so. Along the way, Willy reunites with Jesse"

Harry Potter and the Prisoner of Azkaban
"Something wicked this way comes."
The Mask
"From zero to hero."
Free Willy
"How far would you go for a friend?"
Jurassic Park
"An adventure 65 million years in the making."

The Twilight Saga: Breaking Dawn - Part 2
"The epic finale that will live forever"

The Twilight Saga: Eclipse
"It all begins... with a choice."

The Twilight Saga: Breaking Dawn - Part 1
"Forever is just the beginning"
Free Willy 2: The Adventure Home
"The adventure is back. The fun is back. Willy's back. And this time he's brought his whole family to meet an old friend ... and take on a new challenge."
Beethoven
"The head of the family is the one with the tail."

Madagascar 3: Europe's Most Wanted
"They Have One Shot to Get Back Home."

The Hunger Games: Mockingjay - Part 2
"The fire will burn forever."

E.T. the Extra-Terrestrial
"He is afraid. He is alone. He is three million light years from home."

The Twilight Saga: New Moon
"The Next Chapter Begins."