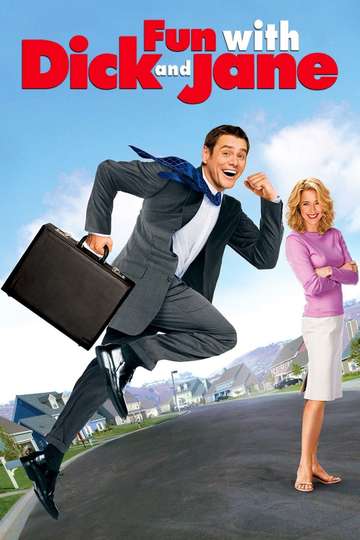 Fun with Dick and Jane (2005)Stream and Watch Online

Looking to feast your eyes on 'Fun with Dick and Jane' on your TV or mobile device at home? Hunting down a streaming service to buy, rent, download, or watch the Dean Parisot-directed movie via subscription can be a challenge, so we here at Moviefone want to do the heavy lifting.

We've listed a number of streaming and cable services - including rental, purchase, and subscription choices - along with the availability of 'Fun with Dick and Jane' on each platform when they are available. Now, before we get into all the details of how you can watch 'Fun with Dick and Jane' right now, here are some details about the Columbia Pictures, Imagine Entertainment, JC 23 Entertainment comedy flick.

Released December 21st, 2005, 'Fun with Dick and Jane' stars Jim Carrey, Téa Leoni, Alec Baldwin, Richard Jenkins The PG-13 movie has a runtime of about 1 hr 30 min, and received a user score of 62 (out of 100) on TMDb, which put together reviews from 1,988 knowledgeable users.

Want to know what the movie's about? Here's the plot: "After Dick Harper loses his job at Globodyne in an Enron-esque collapse, he and his wife, Jane, turn to crime in order to handle the massive debt they now face. Two intelligent people, Dick and Jane actually get pretty good at robbing people and even enjoy it -- but they have second thoughts when they're reminded that crime can hurt innocent people. When the couple hears that Globodyne boss Jack McCallister actually swindled the company, they plot revenge."

Me, Myself & Irene
"From gentle to mental."
The Cable Guy
"There's no such thing as free cable."

Bruce Almighty
"In Bruce we trust?"
Ace Ventura: When Nature Calls
"New animals. New adventures. Same hair."
Naked Mole Rat Gets Dressed: The Underground Rock Experience
Ace Ventura: Pet Detective
"He's the best there is! (Actually, he's the only one there is.)"
Liar Liar
"Trust me."

Click
"What If You Had A Remote... That Controlled Your Universe?"

Mr. Deeds
"Small town kid, big time right hook."
Flip a Coin: ONE OK ROCK Documentary
The Laws of the Universe: The Age of Elohim
"God's Justice Unites All Earthlings"
The Mask
"From zero to hero."

I Now Pronounce You Chuck & Larry
"They're as straight as can be, but don't tell anyone."

Anger Management
"Feel the Love."
Dumb and Dumber
"What the one doesn't have, the other is missing."