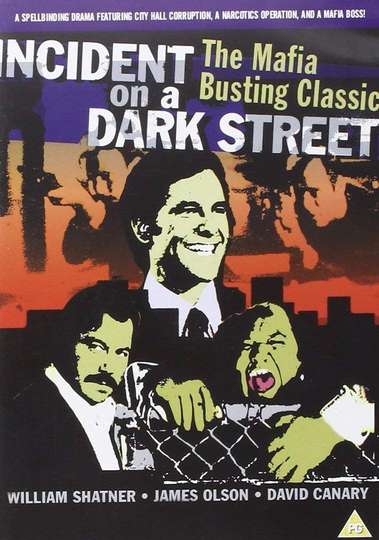 Incident on a Dark Street (1973)Stream and Watch Online

Looking to watch 'Incident on a Dark Street' on your TV or mobile device at home? Hunting down a streaming service to buy, rent, download, or watch the Buzz Kulik-directed movie via subscription can be challenging, so we here at Moviefone want to help you out.

We've listed a number of streaming and cable services - including rental, purchase, and subscription options - along with the availability of 'Incident on a Dark Street' on each platform when they are available. Now, before we get into the nitty-gritty of how you can watch 'Incident on a Dark Street' right now, here are some particulars about the 20th Century Fox Television, National Broadcasting Company tv movie flick.

Released January 13th, 1973, 'Incident on a Dark Street' stars James Olson, David Canary, Robert Pine, Richard S. Castellano The movie has a runtime of about 1 hr 36 min, and received a user score of 50 (out of 100) on TMDb, which collated reviews from 1 respected users.

Curious to know what the movie's about? Here's the plot: "A small-time hood is murdered just as he is about to blow the whistle on an organized crime ring."

'Incident on a Dark Street' is currently available to rent, purchase, or stream via subscription on Amazon Prime Video, DIRECTV, Amazon Video, Tubi TV, and The Film Detective .

Death Saved My Life
"A Ripped From The Headlines Original Movie"

Spin
"Music is everything."

Werewolf by Night
"There’s no escaping the night."

Girl in the Basement