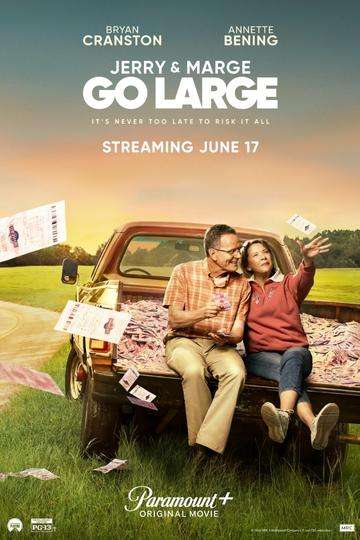 Want to watch 'Jerry & Marge Go Large' on your TV, phone, or tablet? Hunting down a streaming service to buy, rent, download, or view the David Frankel-directed movie via subscription can be challenging, so we here at Moviefone want to do the work for you.

Read on for a listing of streaming and cable services - including rental, purchase, and subscription choices - along with the availability of 'Jerry & Marge Go Large' on each platform when they are available. Now, before we get into the various whats and wheres of how you can watch 'Jerry & Marge Go Large' right now, here are some specifics about the Netter Productions, Levantine Films, Paramount Players, Landline Pictures drama flick.

Released June 17th, 2022, 'Jerry & Marge Go Large' stars Bryan Cranston, Annette Bening, Rainn Wilson, Larry Wilmore The PG-13 movie has a runtime of about 1 hr 36 min, and received a user score of 69 (out of 100) on TMDb, which assembled reviews from 55 well-known users.

You probably already know what the movie's about, but just in case... Here's the plot: "The remarkable true story of how retiree Jerry Selbee discovers a mathematical loophole in the Massachusetts lottery and, with the help of his wife, Marge, wins $27 million dollars and uses the money to revive their small Michigan town."

'Jerry & Marge Go Large' is currently available to rent, purchase, or stream via subscription on Paramount Plus, .

River's Edge
"Which was worse? The murder or what came after?"
Night Vision
"Evil sees all."
Sour Grapes
"A hilarious comedy from the co-creator of "Seinfeld""
Hedgehog in the Fog
Cache Cash
Most Dangerous Game

Dating & New York
"A love story in the city that never sleeps, but sleeps around a lot."
Norm Macdonald: Nothing Special

Montana Story
Accidents Happen
Animal Factory
"On the inside the rules are brutal and the stakes are high."

Crimes of the Future
"Surgery is the new sex."

The Last Matinee
"No talking. No texting. No breathing."

Meet Bill
"A comedy about someone you know."

Movie Review: ‘Death on the Nile’