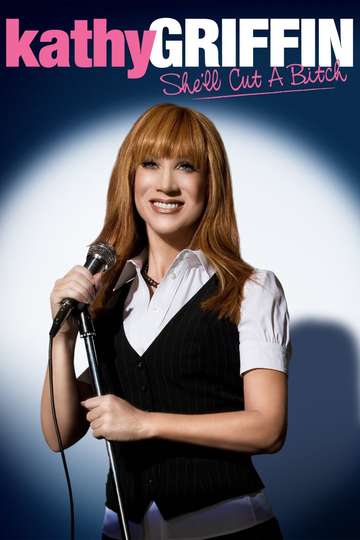 Looking to feast your eyes on 'Kathy Griffin: She'll Cut a Bitch' on your TV, phone, or tablet? Searching for a streaming service to buy, rent, download, or view the Paul Miller-directed movie via subscription can be difficult, so we here at Moviefone want to do the work for you.

Read on for a listing of streaming and cable services - including rental, purchase, and subscription choices - along with the availability of 'Kathy Griffin: She'll Cut a Bitch' on each platform when they are available. Now, before we get into the nitty-gritty of how you can watch 'Kathy Griffin: She'll Cut a Bitch' right now, here are some finer points about the comedy flick.

Released April 15th, 2009, 'Kathy Griffin: She'll Cut a Bitch' stars Kathy Griffin The movie has a runtime of about 44 min, and received a user score of 73 (out of 100) on TMDb, which collated reviews from 7 respected users.

You probably already know what the movie's about, but just in case... Here's the plot: "Two-time Emmy Award-winning and self proclaimed D-Lister Kathy Griffins latest comedy special takes you backstage in Hollywood: from the Emmys to the Grammys and even to the Malibu mansion of Cher! Appearing before a sold out crowd at the Arlene Schnitzer Concert Hall in Portland, Oregon, Griffin is in top form dishing about scandalous misbehaving celebrities and her own uproarious escapades in Tinsel Town." .

Roald Dahl'™s The Witches
"They're real!"

Kathy Griffin Blasted by Both Sides for Decapitated Trump Photo: 'I Went Way Too Far'