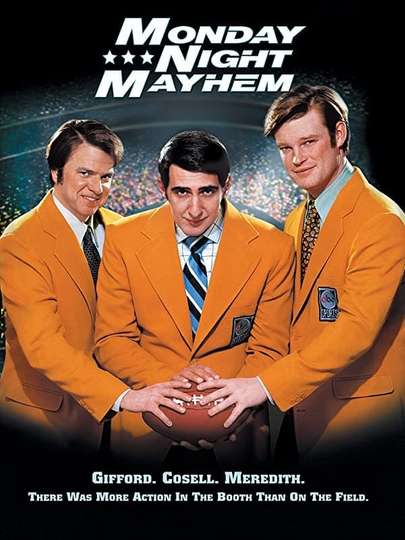 Need to watch 'Monday Night Mayhem' on your TV, phone, or tablet? Finding a streaming service to buy, rent, download, or view the Ernest R. Dickerson-directed movie via subscription can be difficult, so we here at Moviefone want to do the heavy lifting.

Read on for a listing of streaming and cable services - including rental, purchase, and subscription options - along with the availability of 'Monday Night Mayhem' on each platform. Now, before we get into the fundamentals of how you can watch 'Monday Night Mayhem' right now, here are some specifics about the drama flick.

Released January 14th, 2002, 'Monday Night Mayhem' stars John Turturro, John Heard, Brad Beyer, Kevin Anderson The movie has a runtime of about 1 hr 38 min, and received a user score of 53 (out of 100) on TMDb, which assembled reviews from 4 respected users.

You probably already know what the movie's about, but just in case... Here's the plot: "The early years of a television sports powerhouse are chronicled as ABC becomes a player in the NFL coverage by putting their full resources into a major showcase. Executive Roone Arledge (John Heard) recruits former Dallas Cowboys quarterback 'Dandy' Don Meredith (Brad Beyer), along with Keith Jackson (Shuler Hensley), and the combative Howard Cosell (John Turturro) as commentators for the broadcasts, which become funny, odd trio events to millions of viewers. Jackson departs the show after the first year to take over the network's focus on college football, and former New York Giants star Frank Gifford (Kevin Anderson) takes his place, ruffling Cosell's feathers. Then things get really crazy!"