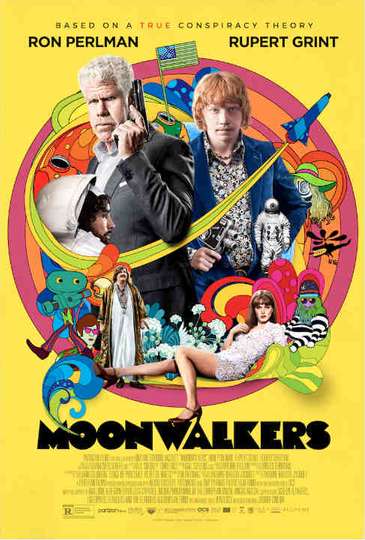 Need to watch 'Moonwalkers' on your TV or mobile device at home? Searching for a streaming service to buy, rent, download, or watch the Antoine Bardou-Jacquet-directed movie via subscription can be difficult, so we here at Moviefone want to take the pressure off.

Below, you’ll find a number of top-tier streaming and cable services - including rental, purchase, and subscription options - along with the availability of 'Moonwalkers' on each platform. Now, before we get into the various whats and wheres of how you can watch 'Moonwalkers' right now, here are some details about the Nexus Factory, Partizan Films, Potemkin Productions comedy flick.

Released March 14th, 2015, 'Moonwalkers' stars Rupert Grint, Ron Perlman, Robert Sheehan, Stephen Campbell Moore The R movie has a runtime of about 1 hr 47 min, and received a user score of 61 (out of 100) on TMDb, which assembled reviews from 282 top users.

Interested in knowing what the movie's about? Here's the plot: "What if Apollo 11 never actually made it? What if, in reality, Stanley Kubrick secretly shot the famous images of the moon landing in a studio, working for the US administration? This is the premise of a totally plausible conspiracy theory that takes us to swinging sixties London, where a stubborn CIA agent will never find Kubrick but is forced to team up with a lousy manager of a seedy rock band to develop the biggest con of all time."

The Captive
Eight years after the disappearance of Cassandra, some disturbing inci...

The Peanuts Movie
Snoopy embarks upon his greatest mission as he and his team take to th...

Midnight Special
A father and son go on the run after the dad learns his child possesse...

Absolutely Anything
Eccentric aliens give a man the power to do anything he wants to deter...

Hail, Caesar!
When a Hollywood star mysteriously disappears in the middle of filming...

Sing Street
A boy growing up in Dublin during the 1980s escapes his strained famil...

Every Guillermo del Toro Movie, Ranked From 'Hellboy' to 'Shape of Water'